I wonder if anyone has done a study looking at the relationship between the ugliness of a tomato plant and its productivity? Our tomato plants are UGLY, but the number of tomatoes we are still getting from them is a little bit ridiculous. 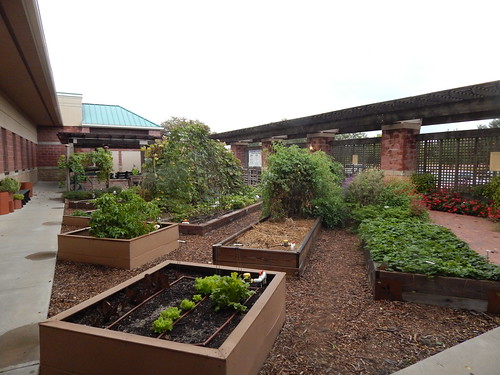 We are slowly taking a few more plants out as they die. Our squash vines are starting to die back as well, but we won’t remove them for a couple more weeks. Past experiences tell us that trying to remove live vines from our cattle panel trellises is extremely difficult. Dead vines are much easier to deal with. Sometimes I’ve even had to cut the vines off at the ground and let them dry for a week before we can take everything down. 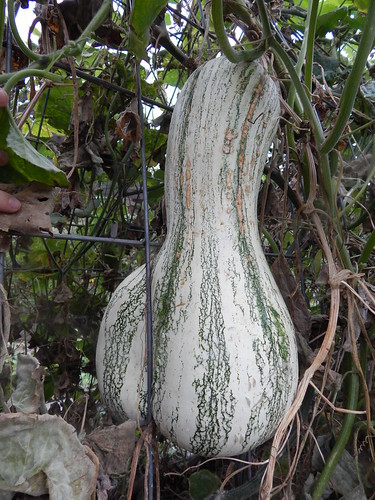 One of our projects this week was to extract this Green Striped Cushaw from where it had grown through the trellis. It took a big knife! 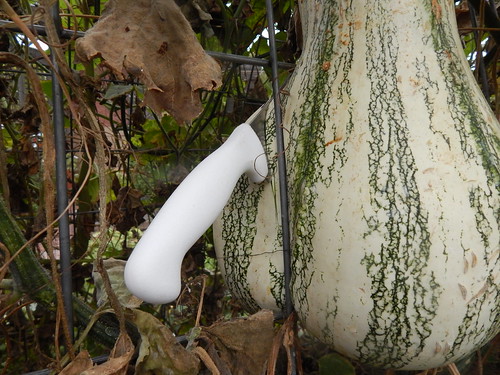 We buried the knife! We cut the back part of the squash off, then had to trim it a bit more before pulling the other part off the trellis. 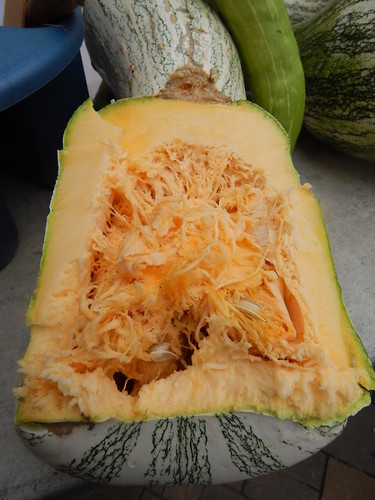 That’s one way to get a square squash! 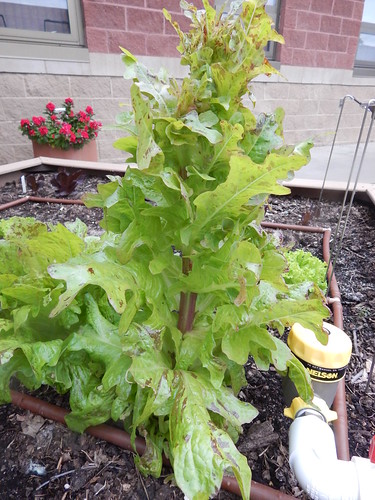 This lettuce plant went and bolted this week. I’m not really sure why. I suspect that the weather fluctuations probably played the biggest role in it. 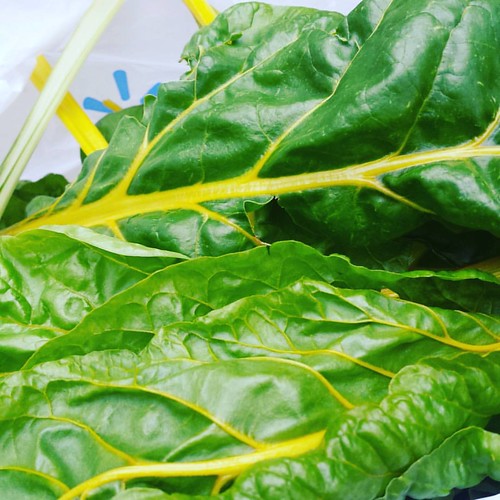 I know, I know…obligatory Swiss Chard photo for the week! I had to change it up with the yellow chard instead of the red. 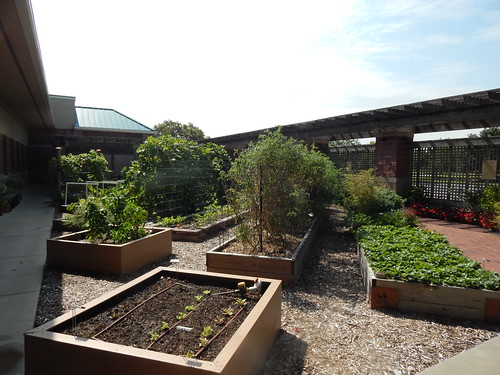 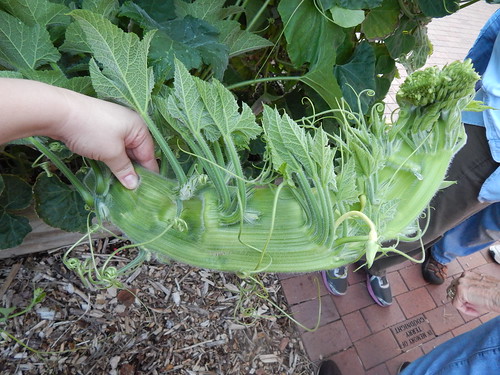 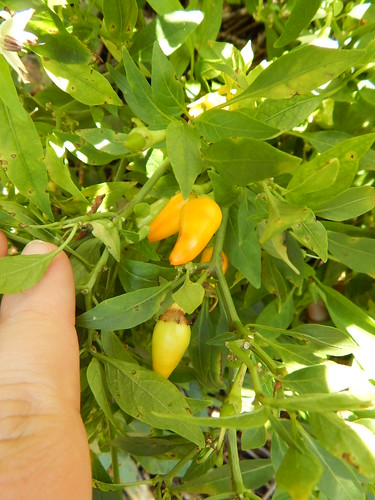 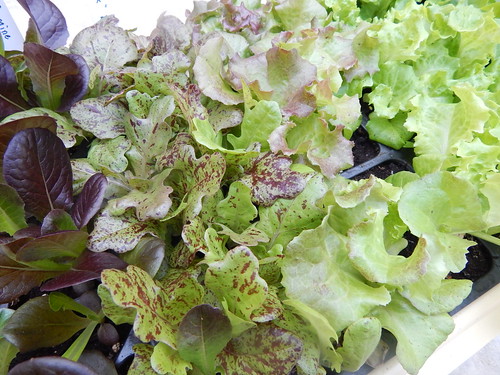 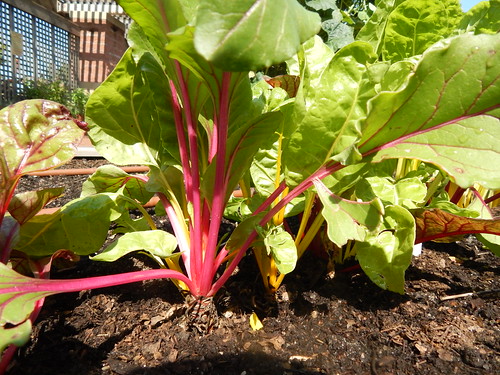 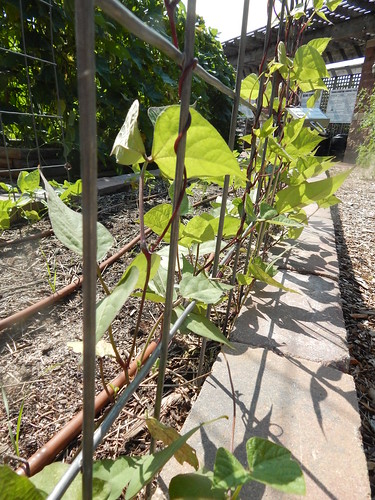 Long time no blog! We have finally completed most of our planning for our 2015 gardens, and I have some exciting things to share with you. We’re going to start out today by looking at Bed 1, which is quickly gaining the reputation of being the mish-mash garden, the random garden, or the variety garden. I don’t remember what name we finally decided on for last year, but it was rather a conglomeration of different things last year, including the quinoa and the Italian vegetables.

Let’s take a look at this year’s plans for The Random Garden.

As you can see, this bed has a lot going on! We also have plans for each season. The first part of the bed is planted to 2 different varieties of Summer Squash: ‘Segev’ and ‘Partenon.’ These squash varieties are parthenocarpic. Yes, I know that’s a big scary word. Basically, it means that unlike other squashes, these varieties do not need pollination in order to set fruit. Why choose one of those varieties? Because we can cover them with row cover for the entire season in hopes to protect them from squash vine borers! We’ll have to see how that turns out!

In the center two sections of the garden we are trying two different peanut varieties. ‘Schronce’s Deep Black’ has black skins inside the peanut shells. ‘Tennessee Red’ is a Virginia type that is supposed to be earlier maturing.

The other end of the bed is a lettuce/salad green garden. We have selected several varieties of lettuce that feature different colors, leaf shapes, and types. We also have ‘Maribor’ Kale and ‘Electric Neon Blend’ Swiss Chard that we hope will grow through the summer and into the fall.

Once the spring lettuce is done, we are following that with a planting of Edamame (soybeans that are eaten at the green stage, like in Japanese cuisine). The variety we chose ‘Butterbeans’ is supposed to be high yielding and flavorful. After the edamame, we will plant spinach for the fall.

Following the squash, we will plant some more lettuce for the fall, some repeated varieties and others just for fall, including a dark red romaine, ‘Thurinus.’

As of writing this post (Thurs. AM), we haven’t gotten a significant amount of rain in the Demo Garden this week. I know some of you in other parts of the area have gotten more. Here’s hoping that we’ll get some good rain either this afternoon or tomorrow!

Yet again, you can see the gradual decline of the tomatoes. I had a conversation with a garden visitor this week, where I told her that I would rather have ugly tomato plants with great tomatoes than pretty plants and no tomatoes! We are also starting to take a few plants out here and there. One of the trellises is completely empty now!

The arugula and Swiss Chard in the pizza garden is just about the perfect size for salads right now, and I would imagine they would also be good on a pizza! Yum!

The fall brassicas garden is growing like crazy, although the caterpillars are still munching like crazy too. Actually, they aren’t as bad at the moment. There is some feeding damage on the new growth, but nothing like it was earlier. And there are still those annoying little white butterflies flitting around. I’ll be happy when I quit seeing them!

You can clearly see the effects of the spider mites on those leaves, but they sure don’t seem to be slowing down the production of these grape tomatoes. After all we harvested on Tuesday, I still got another half gallon of tomatoes today. Yikes! There are also some that I just can’t reach because of the way the tomato cages and vines are intertwined.

This cool looking moth was hanging around the garden this week. I am pretty sure it is a Whitelined Sphinx Moth, which is supposedly the most common sphinx moth in Kansas. Apparently the larvae mostly feeds on weeds. If it lays its eggs on the cabbage, those caterpillars won’t be happy (since we treat for caterpillars), so I hope it was just visiting.

The Lunchbox peppers have been doing pretty well all summer, but they are going crazy now! They are very productive, especially compared to the Yummy peppers we’ve tried in the past.

First off, I have to point out that yesterday’s Eggplant Lasagna post that said “Eggplant is my new favorite vegetable” was written by Denise, not me. I will admit that some of the recipes Denise has tried are definitely tasty, but I’m not sure that raises eggplant onto my “favorite vegetable” list. Let’s take a tour of the garden, shall we?

Here’s the whole garden picture from this afternoon. The tomatoes and other summer vegetables are starting to get that slight yellowish brown cast to them…They aren’t quite that same deep green color as they were a few weeks ago. The sweet potatoes are still crazy and you can see the brassicas growing like crazy in the distant beds.

This is the ‘Deadon’ cabbage variety. We seem to be starting to get a handle on the cabbageworms to some extent. This plant doesn’t have any damage on the new growth, for the most part. We are still regularly applying Dipel dust (Bt) to keep the caterpillars at bay. I still see the cabbage butterflies flitting around laying eggs and a few of the caterpillars lurking here and there. I’ll be glad when it cools down so the insects don’t reproduce as fast!

Hey! We’ve got Swiss Chard! This is the ‘Fordhook Giant’ that is planted in the Pizza Garden. I thought it was going to be white stemmed, but it is looking rather pink stemmed at the moment. Not that I (or the camera) will complain as the fall progresses.

This is the Fall/Winter Salad mix that we got from Wild Garden Seed. They have different mixes designed for different seasons, which is cool. The other neat thing is that they divide the seeds for each mix into 2 packets, a “slow germ” and a “fast germ” packet. The idea is that you plant the slow germinating seeds first and the quick germinating seeds a week or so later to help have the plants ready to harvest at the same time. The seedlings along the middle dripline were planted 2 1/2 weeks ago, and the ones along the close dripline were planted 1 1/2 weeks ago. They are about the same size now, so we’ll have to see if that amount of staggered planting worked out or if we should have waited another week to plant the faster germinating seeds.

The vegetable arbor has really turned into the cherry tomato arbor. Not that I’m complaining…it’s pretty neat. It is a trifle overwhelming though. I picked about a half gallon bag full of cherry tomatoes this afternoon just by going after the ones that were within easy reach. Yikes! Both of these varieties (Super Sweet 100 and Golden Honey Bunch) are winners in my book.

It looks like we have successfully gotten a good stand of carrot seedlings this year. I was worried about that, given the sandy soil and the weather. The kale and spinach were not as successful, so we may have to try replanting those if it every cools down again.

Some of our tomato plants (other than the cherry tomatoes, which are constant), are still plugging along. Both the ‘Limmony,’ shown here, and the ‘Jetsetter’ plants have a lot of medium-sized, developing greet fruit. If it doesn’t cool down too much, we could still have quite a lot of tomatoes ripening this month.