It’s been a few weeks since our last PhotoEssay, and the garden has changed significantly! Here’s our overview for this week: 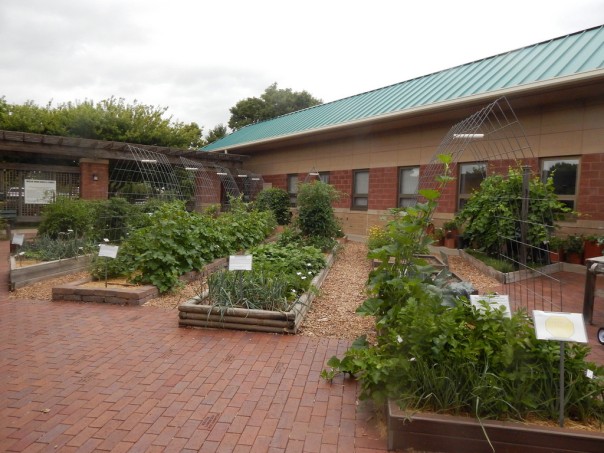 Just a comparison of the same view last week: 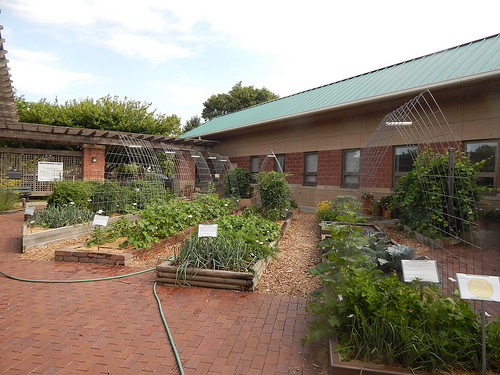 And the same view three weeks ago:

The vine crops have grown more than 10x bigger overall (and I’m pretty sure twice the size just since last week!) and the tomatoes are at least twice the size. The peas are gone and have been replaced with more plantings of squash and melons.

While the garden looks great from a bird’s eye view, from a closer look I can tell you that some of the normal summer disease and spider mite issues are already starting to take hold.  But….I have enough neat things to show you without showcasing the start of the usual death and destruction. 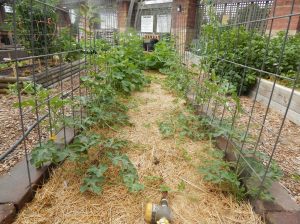 Here’s another view of the Vertical garden, taken a week ago. The vines had just reached the size where clipping them to the trellises was necessary that week, and they were already escaping the trellises again. 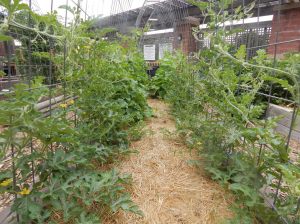 And the same view again, perhaps a slightly different angle. This was taken yesterday. While the watermelon vines (closest to the front) are not thick (yet), they have clearly been growing quickly! It takes regular clipping or tying to keep the vines from getting out of control. 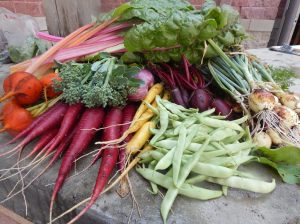 We had a big harvest week this week as well. I’ll be posting the Grocery Garden Harvest Report soon, but we also harvested some sprouting broccoli, Swiss chard, kale, and onions from the accessible beds, cabbage from the colonial garden, and eggplant from the containers. The beets, carrots, and beans are from the Grocery Garden. 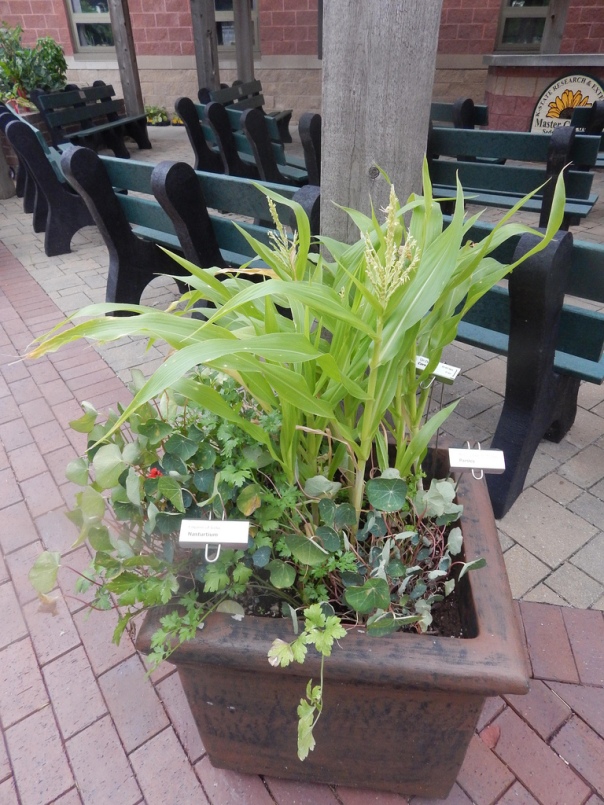 The ‘On Deck’ sweet corn is tasseling! It isn’t even three feet tall when it supposedly should be five. Perhaps a little short on nitrogen? At any rate, corn doesn’t typically put on height after tasseling. I don’t see any signs of ears developing yet, so I’m not overly optimistic…But it is cool to have corn growing in our garden in a container. Maybe we will recommend it as an ornamental for containers?
﻿ 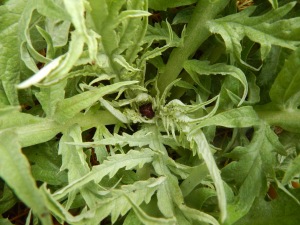 This is one of the artichoke plants. If you look really hard at the center of the picture, you can see a small, purple bud, which is the start of what will be the artichoke at some point. Artichokes actually ARE the flower buds. This one is still very immature, but it’s nice to see that we’ll get something out of this bed, even if not very much.

We survived a rainy, stormy week and the garden looks generally green and healthy. 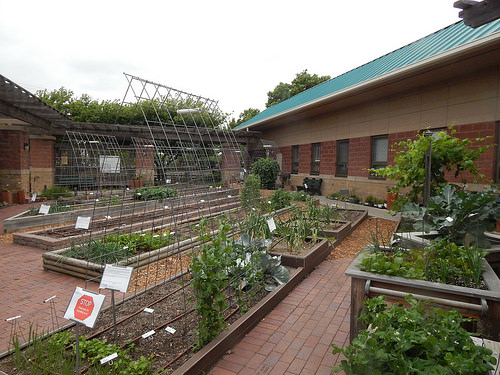 We also planted most of our remaining warm season plants this week, including replanting some things that hadn’t been successful so far… 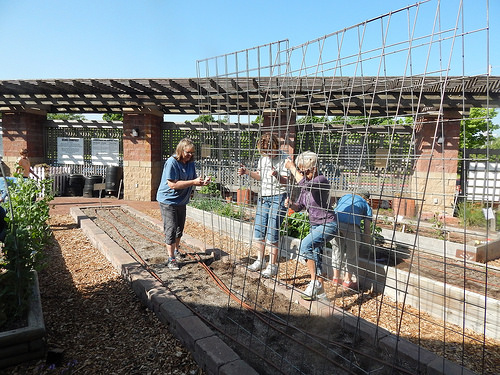 Part of that planting was putting up all of our cattle panel trellises before planting our vine crops. We planted cucumber, watermelon, and cantaloupe seeds this week. I think they have managed to stay well watered! 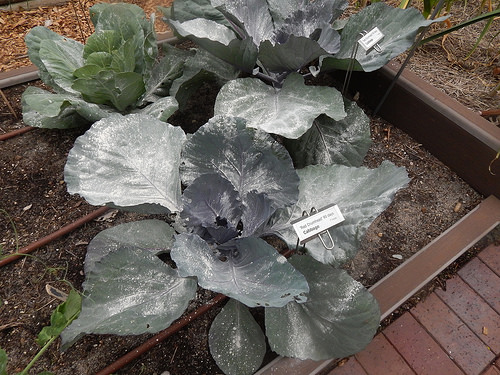 We also saw some pesky insects starting to make an appearance. The holes in the cabbages turned up some young cabbage loopers on the undersides of the leaves. We treated with Dipel Dust (a bacterial-based product) on Tuesday. Unfortunately, most of it did wash off later. Hopefully it did enough to get rid of the majority of the caterpillars. 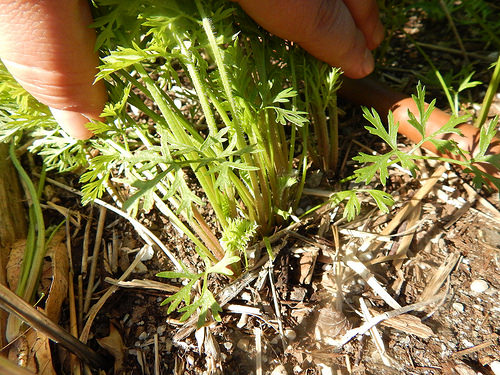 Like most other plants, our carrots are growing well. Unfortunately, the plants are a bit too thick to produce good carrots. We thinned the plants out so that there is about one carrot plant per inch. This should make it easier to get good quality carrots rather than carrots that are twisted around each other. 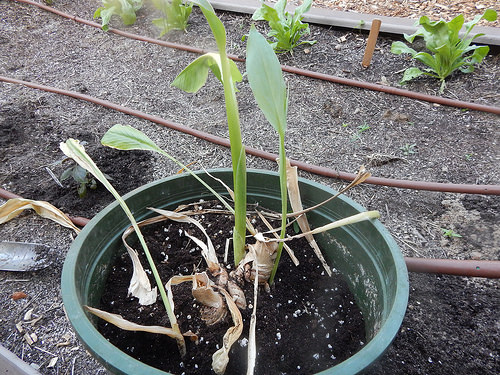 We also transplanted our gingers back outside this week. They had been in my office and are more than ready to go back out. This is the turmeric. The rhizomes are still nice and healthy, but it is just starting to come out of dormancy and put on new growth for the year.

We are almost done with our spring planting, so from here on it is just a matter of watching everything grow!

We have a dedicated “Vertical” garden again this year, featuring the cattle panel trellises. We do try to change up what we’re growing, and this year we are featuring cantaloupe, watermelon, and cucumbers.

The cucumbers include a pickler, a slicer, and an English/European type. The ‘Arkansas Little Leaf’ is a pickler with smaller diameter leaves than a usual variety that is also heat and disease tolerant. The ‘Lime Crisp’ has bright green skin rather than darker green as is usual. ‘Tyria’ is a parthenocarpic (seedless) English variety. We had another variety selected, but it cost about $1.25 per seed, and we couldn’t buy less than 50 seeds…so that was a NO.

We have done cantaloupe in the past, but we have always stuck to the smaller fruited varieties. This year we have ‘Lilliput,’ which is a new personal size variety that is supposed to be very sweet. But then we chose two other varieties, ‘Maverick’ and ‘Sarah’s Choice’ that are larger. ‘Sarah’s Choice’ is a 3 pound melon, and ‘Maverick’ is a 4-5 pound melon. It will be fun to see how successful they are in the trellis system. 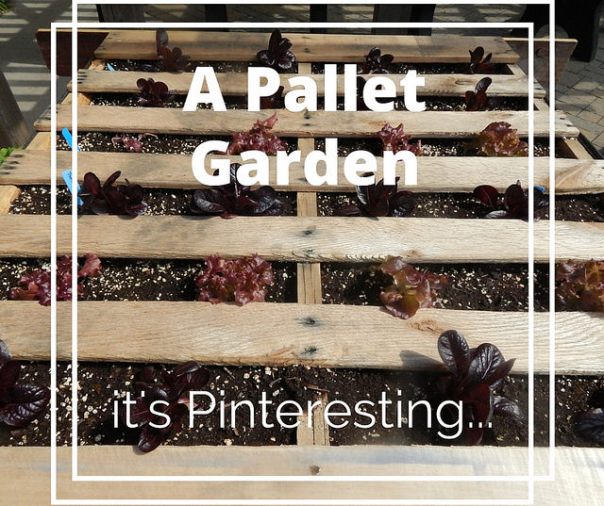 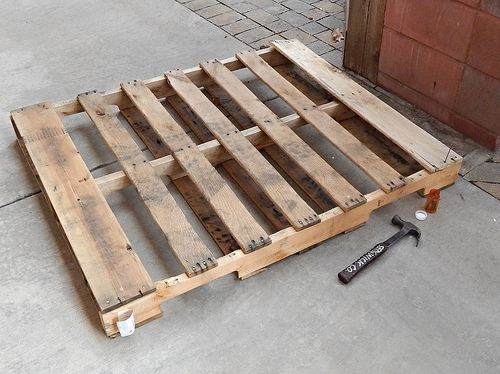 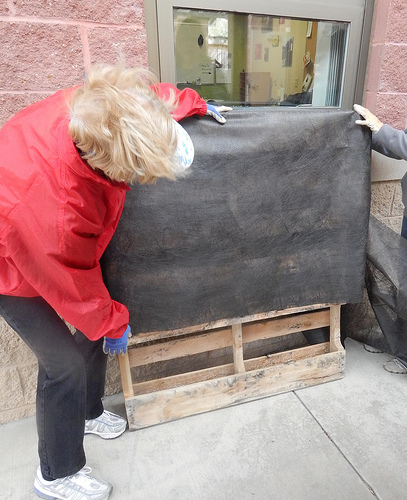 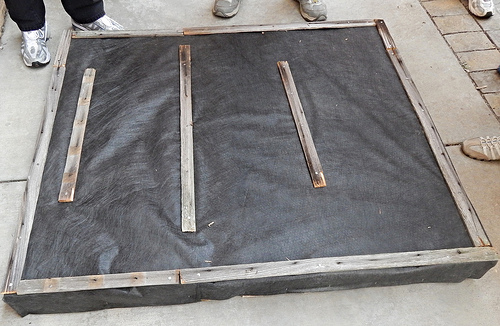 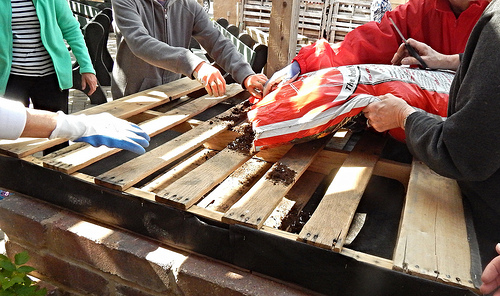 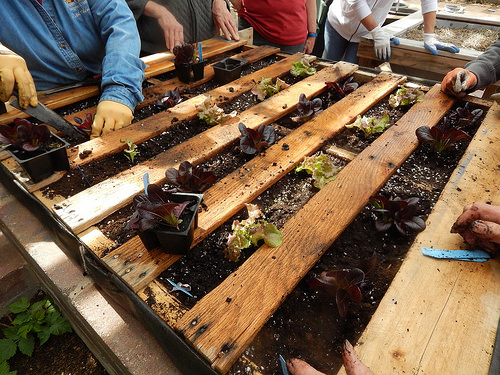 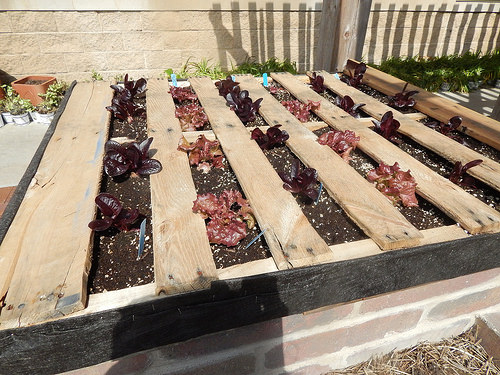 I think the Demo Garden path is paved with my good intentions of posting more frequently. Time just seems to slip away from me earlier in the week! 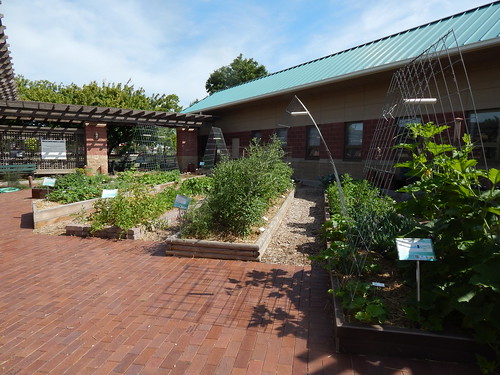 Luckily, the garden does not rely on me to blog regularly in order to grow. We really would be in trouble if that were the case! You can see on the right side of the picture that the pumpkins are doing their best to be the first to the top of the trellis. Some of our other cucumbers and vines are just being pokey. 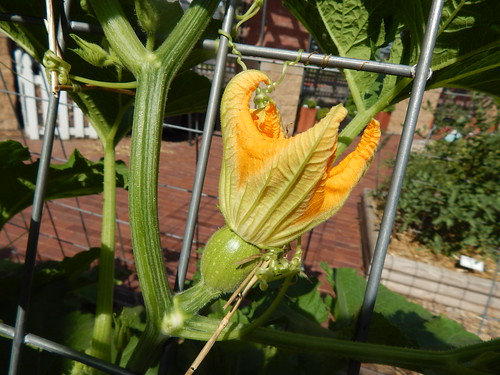 The pumpkins are also doing their best to be the first vine crop with fruit set. They might win! I didn’t see any bees this morning, so I tried to help the cause by transferring pollen from one of the lower male flowers to this female flower that was open. I guess we’ll see if I was successful. 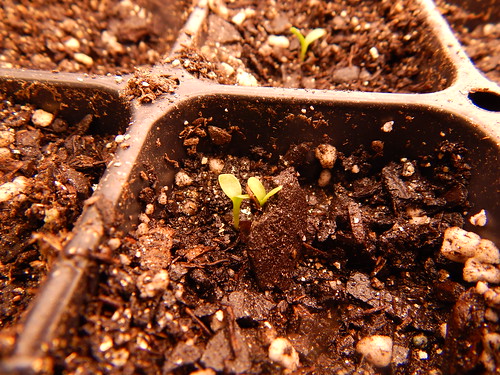 We have new babies! Again! We planted some chicory and onion seeds inside this week, and a few of the chicory are already up. I’m a little surprised, because sometimes chicory can be a little slow. That’s one of the reasons I wanted to start them now rather than in two weeks. They also have a relatively low germination percentage (about 65%), so this way we will be sure to have enough plants in about 6 weeks. 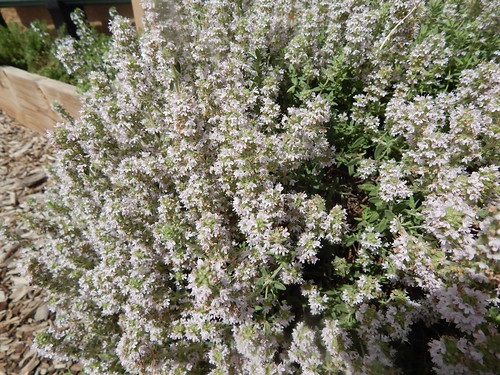 This Rose Scented Thyme is blooming like crazy. It is almost completely coated in pale pink flowers. It is obviously very happy with its location. 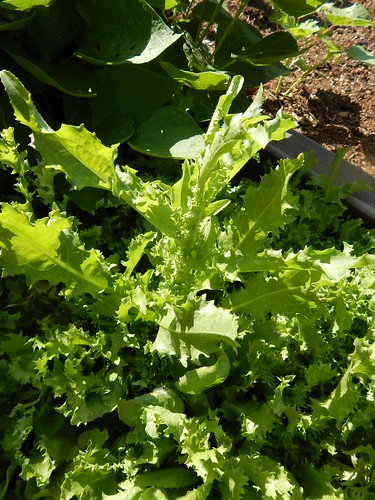 Also blooming, but not nearly so attractive is this Endive. Not all of the endive mesclun plants are bolting, but I’m sure they aren’t far behind. That means we will be pulling them out soon and getting ready to plant the bulbing fennel for fall. 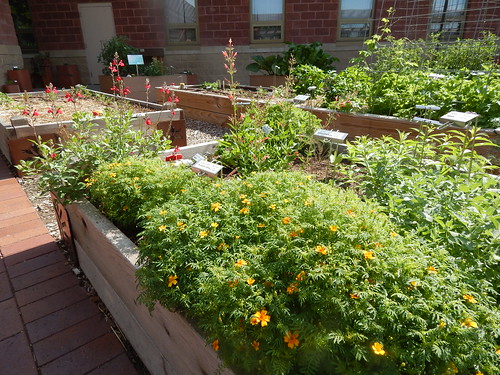 The Herbs & Flowers garden is looking so nice already, and the citrus marigolds are still looking better than they ever have before. I’m going to have to find some recipes using citrus marigolds!