I’ve considered continuing the Friday PhotoEssay through the winter, but seriously, I would just bore you with pictures of ice, snow (maybe!), and dead plants for most of the winter.

However, I did receive my first seed catalog in the mail on Monday, so I decided on the spot that I would post “catalog reviews” as I receive new catalogs. What I really mean by catalog review is that I will jump up and down and drool all over the pretty pictures of whatever is new and spiffy in each catalog as they arrive. No, I’m not going to be critiquing the layouts.I’m going to try reallyreallyreally hard to talk about no more than 5 things from each catalog. REALLY hard. But we’ll see.

Yummy Mix Peppers: The first thing I noticed was the Yummy Mix Peppers on the back cover of the catalog. Yummy has been around for a few years, but they now have the mix available to the average Joe. These are the cute little colored snack peppers that you pay an arm and a leg for in the grocery store. They are delicious!  I do have to say that I had a hard time getting them to germinate the first time I tried them, and then the deer and rabbits ate almost all the peppers. Annoying!

Brandymaster Hybrid (VF) Tomatoes: Given the recent popularity of heirloom tomatoes, it was only a matter of time until someone hybridized them to get some disease resistance but keep the flavor. They have pink, red, and yellow Brandymasters available. If you don’t have space to rotate your tomato planting spot, these would be a good choice. I would be very interested to see these grown next to heirloom Brandywines just to see the difference.

Zebra Cherry Tomato: This is a compact cherry tomato for growing in containers or hanging baskets. It produces 1″ fruits that are red and green striped. This could be a fun one for the kids to grow on the porch or deck!

Zavory Pepper: This pepper was developed at Penn State University. It is a habanero, but doesn’t have the heat. So if you want that habanero flavor, but don’t want to die when eating it, this would be the right choice for you!

*Disclaimer* None of these seed companies are giving me anything to talk about their catalogs or seeds. I’m not advocating any particular company over another, nor am I telling you they are cheaper/better quality than another company. Just because I mention a particular variety of vegetable, it does not mean that it will necessarily perform well under Kansas conditions. I’m just sharing what I notice that I would be excited to try as a gardener.

I’m considering renaming this blog. How about “101 Things to do with Swiss Chard”? I feel like that’s what it’s turning into. However, I have discovered some quite tasty Swiss Chard recipes by virtue of having so much of it to experiment with.

My husband found this recipe, and I was definitely skeptical. See if you don’t agree with me:

See? I was skeptical. But we have plenty of Swiss chard, not to mention a HUGE sweet potato we bought at the Farmers’ Market back in October. And just think, I’m posting this just in time for you to add this dish to your Thanksgiving menu. Maybe not.

So, this recipe came from the food blog, Smitten Kitchen, home to many other tasty recipes. You can get to the full recipe here.

But basically, you take heaps of Swiss Chard, a bunch of sliced sweet potato, a nice white sauce with garlic, heaps of Swiss cheese (we used cheap cheese, not Gruyere), onion, fresh herbs, some seasonings, and layer it all together.

Here’s the onion and chard stems getting cooked in some butter and nutmeg. It’s so pretty, it has to be tasty! (The chard greens get added in too, just a bit later.) 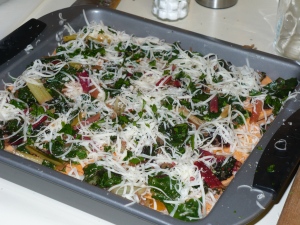 The gratin before getting its last dose of white sauce and cheese.

Mmm…it looks so delicious in its golden brown goodness! On first bite, I thought, ‘This is totally not worth the work.’ After the first piece, I thought it would be good once a year. After we’ve eaten the whole thing, it is definitely a good dish for a Friday night or some other night you have a little more time to cook, lots of chard available, and want something warm and tasty!

I did harvest some things from the garden last Friday, and also yesterday. Here’s what we’re still seeing in the garden:

The Family of 4 Garden

Any guesses? No? C’mon, I’m sure you can guess at least ONE of the things I harvested out of the Family of 4 Garden.

I think most of the vegetables in the garden didn’t mind the cold much, and are very appreciative of the return of some sunshine! I know I’m glad the sun has returned, at least for a few days.The resilience of plants is always surprising.

This winter wheat was grown for a 4-H banquet centerpiece, and then was unceremoniously dumped into the compost bin. It seems quite content with its lot, even though it is going to get ground up and mixed into the compost this afternoon.

This salad mix (lots of mustard and choy) and the lettuce next to it seem none the worse for the little bit of frost earlier this week. I think I may have a harvest to report by next Monday. Yum! 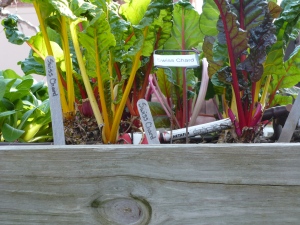 In case you couldn’t tell from all the labels, this is the Swiss Chard.

Hmm…maybe this is the wrong picture to end on. This is some tiny, seedling henbit that is growing in the bed out by the lattice wall. I guess henbit is our winter crop for that garden!

We’ve now officially had our first frost in the Demo Garden, and it was pretty anticlimactic. Everything that would really have died good and hard has already been pulled out. Everything that is still in the garden tolerates cold weather pretty well. I did find some nice frost crystals on the Bok Choy in the Family of 4 Garden.

I’m pretty sure that the opinion of the spinach is something along the lines of “Bring It ON!” If anything, I think it looks more delicious with a frost under its belt. The Swiss Chard is also looking pretty haughty. “Frost? What frost?”

The only things that look a little nipped are the Asian greens, especially the mustards and bok choy. I think they will be fine though, once it warms up. They are pretty tough plants!

Posted in Around the Garden, Family of 4 Garden