It has been quite the ride since I posted our first look at garden plans for this year, hasn’t it? So many things have changed, and likely many others will before it is all said and done. Because our face-to-face programming is suspended for the time being, we have been thinking about how to adjust our garden for the summer to accommodate the safety of our staff, volunteers, and the public. At the same time, we know that many new gardeners are seeking information on how to start and maintain a successful vegetable garden, and that access to fresh, healthy food is more important now than ever. (And it has always been important!)

Because most of our early spring planting was eliminated, with the exception of plants that we already had ready to go, we have re-planned chunks of the garden to change those plans. We also had several parts of the garden that were planned to be more novelties, ornamental, or trials of things that we didn’t know quite how they were going to perform. In order to best fulfill our educational mission and serve our broader community, we have eliminated the majority of those types of plantings from the garden, and will instead replace them with the following:

Some of the things that we have maintained include:

An additional change, along with planting varieties that emphasize productivity, is that we will be donating significantly more of the produce to those in need. Most years, a large portion of our produce is used for educational programming – for our Master Gardeners or others in the community, and extra produce has been donated. This year the primary focus of our garden will be to donate to those in need as a food bank garden.

As always, we look forward to growing and learning along with you! You might also be interested in joining our new, Victory Garden 101 Facebook Group to engage in more conversations and learning about vegetable gardening. What changes have you made to your garden plans due to the pandemic?

Posted in Around the Garden, Garden Planning, Planting Time

There’s no question about it, spring was reluctant to come and stay this year. While we have tried to stay on schedule with our planting, we ended up delaying a few things until it got a bit warmer. Thankfully, the warm weather coincided with tomato planting time, so we are pretty much back on track!

This is the garden in mid-April. You can see from the wooden stakes that things had been planted…but not much green was showing up!

Jumping ahead three weeks to today…there’s a lot more green to be seen, and you can also see that we have been adding trellises and tomato cages!

Of our early spring planting, these plants are probably the most spectacular right now. These Chinese cabbages were transplanted the third week of March and have survived multiple nights below freezing with NO protection, snow, cold rain, and wind. The light green is ‘Tokyo Bekana,’ a loose leaf cabbage. The red and dark green are both heading types of Chinese cabbages that are just barely starting to form their heads.

Also beginning to look good is our SNAP-Ed garden. The radishes, spinach, and lettuce are all finally growing well, and we inter-planted the peppers, tomatoes, and herbs this week. Look for more about this garden to come next week!

Of the lettuces we have in the garden this spring, this one is by far the most interesting. This is a variety called ‘Italienischer.’ It is very upright and dark green. At maturity it is supposed to be 18″ tall and heat tolerant. It also has the unique oakleaf leaf shape. It almost looks like an overzealous dandelion!

While not as beautiful, I also had to share this heirloom lettuce variety – mostly because of the name! The lightly red-tinged leaf lettuce has the name ‘Drunken Woman Frizzy Headed.” I don’t know who came up with that, but…it’s quite the name.

In addition to tomatoes, we planted most of our herbs (except the basil) and all of the various beans this week. Next week we hope to get the peppers planted as well as the cucumbers, squash, and melons.

Hope to see you at Herb Day tomorrow!

Posted in PhotoEssays, Planting Time, Working in the Garden

We have kicked off our planting season in the Demonstration Garden with work days the last two weeks. We went from a garden that was full of volunteer wheat and cheat to a garden that had the beginnings of our plans implemented for the season.

As you can see, the weeds/grass and leftover plants from last year were having a field day. This picture actually looks better than it would have a day previously, as the Compost Committee graciously pulled the weeds and spread compost in Bed 4!

Here’s the “After” shot from yesterday. We removed the old hops vines, most of the other dead plants and all the weeds. We added a whole bunch of compost to the beds that needed it, and got started with planting.

The Colonial Garden is probably the farthest ahead in the planting game, as the vast majority of the plants in this garden are spring/fall (cool season) veggies. We transplanted three types of lettuce that Thomas Jefferson had records of planting, as well as two heirloom cabbage varieties and an heirloom, vining pea. We also planted both parsnip and salsify seeds.

The Accessible planters are largely planted already with spring crops. These planters will have a mixture of kale, chard, sprouting broccoli, spinach, lettuces, radishes, and peas for the spring. We will have a couple tomatoes later on, but again, lots of spring/fall crops.

One of the most interesting things in the early spring planting is this kale mix. It is called Kale Storm Mix, and we planted it in several of the containers. This is a multi-seed pellet, sometimes called a “fuseable.” They’ve been around the flower industry for a few years, but this is the first time I’ve seen them for veggies. The seed company took 3 kale varieties and mixed the seeds in a uniform ratio and put them into these larger “seed pellets.” The result is supposed to be an evenly mixed, visually attractive blend of kale. We’ll see how it turns out!

The ‘Cascade’ Hops is also an interesting experience. Last year I was afraid it wasn’t going to do much for the longest time. Then it did finally take off and grow. This year it is already half way up the cage before April 1st! Yikes! Another fun factoid: hops shoots are edible like asparagus. We tried nibbling on them, and they do taste like asparagus at first. But then there is a really nasty bitter aftertaste. Ugh! There’s a reason hops are not grown for spring edible shoots!

This has been a busy week, because we also got all our tomato and pepper seeds started inside. I don’t have any pictures of the plants yet, but I’m sure you can go back into the blog archives if you want to get the idea!

And just in case you were curious, I’m not planning on planting my tomatoes any earlier than usual – at this point. It’s cold today, and there’s a lot of weather to come before it is tomato planting time!

Posted in Around the Garden, Planting Time, Working in the Garden

Prepping for Fall & Beating the Heat

Many years, fall is my favorite time in the garden here in Kansas. The tricky thing is getting yourself into a “fall” mindset when it is still blazingly hot in early August. Yes, now is the time to plan, prepare, and plant your fall vegetable garden!

We started seeds for some of our fall plantings about 4-5 weeks ago: broccoli, cauliflower, Japanese winter bunching onion, kale, and bok choy.

I moved them outside onto the table near the building last week, so they don’t look quite this nice anymore. The flea beetles are going to do a number on our fall brassicas, I’m afraid.

Despite the heat, I wanted to get at least some of these plants in the ground, because they are drying out too fast in the cell trays.

Timing isn’t too critical on some of these, but the broccoli and cauliflower may not have a long enough growing season if we don’t plant them soon.

We also have a number or root vegetables that need to be planted soon if we want to get a good crop.

Things like lettuce and spinach need to wait a few more weeks, because the soil is just too warm to plant now. They also grow faster, so we can afford to wait a bit longer to plant.

In preparation for planting some of our root vegetables next week, we put a thick layer of straw mulch down in some of the planting areas. Organic mulches like straw can cool the soil up to 10 degrees in addition to helping with soil moisture. Hopefully we’ll get better germination because of the straw.

For more ideas and techniques about fall vegetable gardens, here are several posts about fall gardening from a few years ago:

Fall Gardening: Why Try It and What to Plant

Fall Gardening: Kansas Climate Conditions for Extending into the Winter

It was planting week in the Demo Garden! If you go back and look at the last whole garden picture, you can see just how much the garden has changed in just a couple of weeks. We planted the tomatoes on Tuesday and the peppers, eggplant, and annual flowers today.

The only things still to plant are the cucumbers, melons, and a few other very warm season things like our oddball root vegetables and tropicals. (More to come on some of those things next week.) 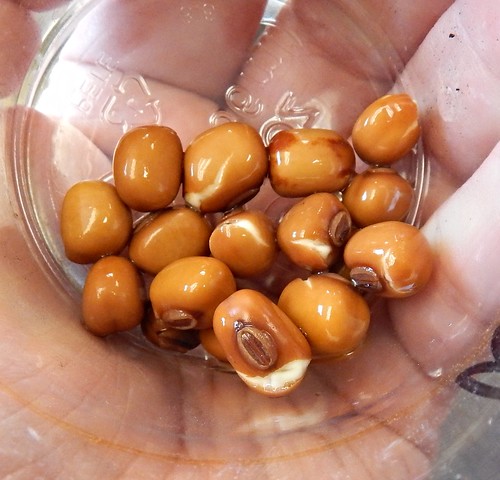 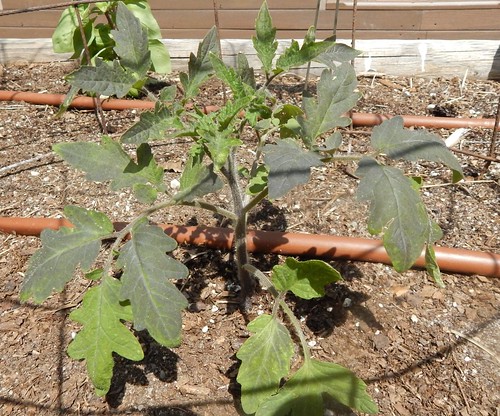 This is the ‘Black Beauty’ tomato plant. I don’t know if it is the weather or just a characteristic of that plant, but the older leaves have a purple cast to them. Normally I would call it a phosphorus deficiency, but it doesn’t look quite right, so I am wondering if the plant has extra purple pigment due to the anthocyanins in the fruit? 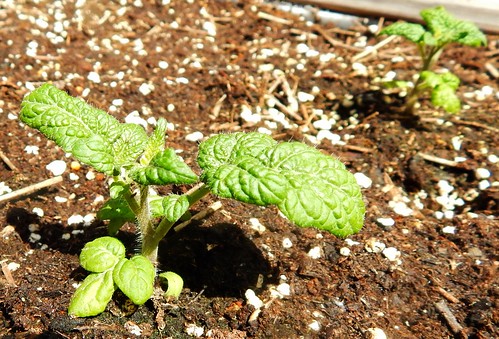 Since we’re on the topic of odd tomato plants, take a look at this cute little guy. It almost looks like a new potato coming up, but it is definitely a tomato. It is still short, but it is the same age as the large plants we transplanted. This is the ‘Patio Plum’ tomato, which is supposed to be very columnar but also compact. So far it is clearly very compact!

For the last two years, the pollinator garden has been beautiful by the end of the season, and I always regretted not taking pictures of it every week to catalog the changes. I’m going to try to take regular pictures of it too this year.