I am cautiously optimistic that I will be able to go through each bed we have planned and go into more details about the varieties we have chosen and what we will be doing with each raised bed. So let’s kick that off with a closer look at Bed 1!

As we discussed in the general garden plan post, this bed is all about herbs (and some edible flowers)! Very generically, we could say that the green end is culinary, the red end is tea, and the blue is some of each. However, there are obviously some things that can cross over from culinary to tea and back. I’m not going to cover every last detail of each plant, because that would make this post ridiculously long. However, I do want to call out a few specific things.

First, the nematode situation. This bed had root vegetables in it last year, with variable levels of nematodes. The two central square tiers had parsnips all year long, and the parsnips were DISGUSTING on an epic level with their nematode infestations.

As you can see – disgusting – and not very edible. The longer end sections had evidence of nematodes, but weren’t nearly this bad, particularly on the radishes. We spend a long time looking for research papers and articles discussing nematode resistance in herb plants. One thing we found that was interesting was that some herbs – like mint and basil – had just as much root damage from the nematodes, but it didn’t impact their top growth. We found mixed results on things like marigolds, nasturtiums, oregano, marjoram, and salad burnet. So we are going to try all of those directly planted in the soil. The mint will be in pots because, mint.

The lemongrass and the Hibiscus sabdariffa (aka Roselle) will also be grown in very large pots. We will be procuring lemongrass stalks from a grocery store and rooting them to get the best culinary type. And the Roselle is the type of hibiscus that is commonly used for teas.

In the center of each end of this bed we will have some type of trellis, one with a jasmine plant and the other with blue butterfly pea (Clitoria ternatea). These are both vining plants with flowers used for teas.

Another plant of interest is the ‘Zloty Lan’ Chamomile – a variety that is supposed to have larger flowers and more robust plants.

Most everything else listed should be fairly straightforward, and we won’t know specific varieties until we are able to purchase the plants from one of our local vendors. I think it is safe to say that we should have a very fragrant and tasty garden in Bed 1 this year! 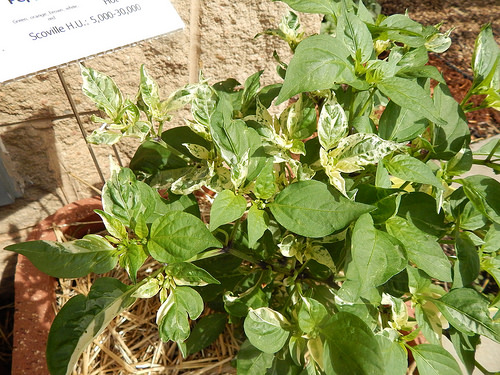 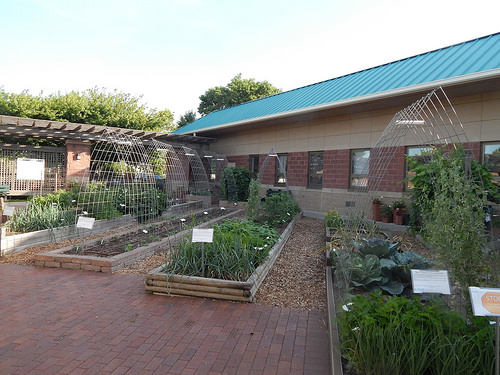 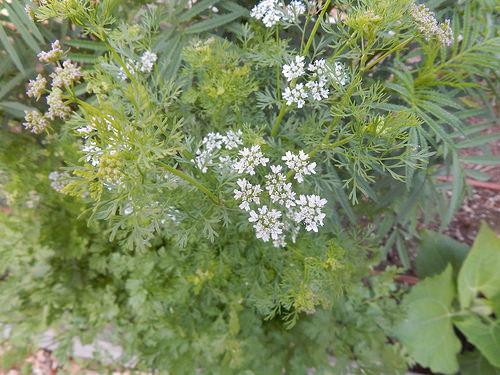 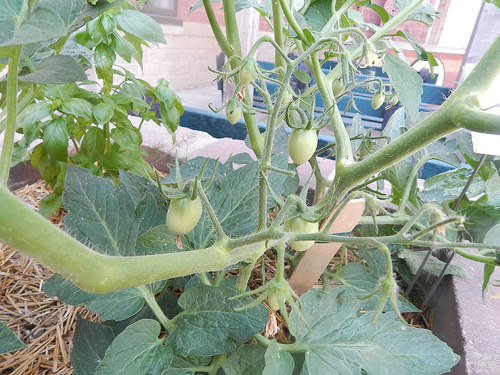 This is the final post looking at what we are planning to do in the Demo Garden this year. From here on out, we will be looking at what’s already been growing while I’ve still been catching up on the garden planning posts.

Most years we do either flowers or herbs in the containers. This year we are planting a mixture of vegetables, herbs, and flowers in all the containers. Hopefully they will be both productive and attractive!

Most of the containers have been planted to lettuces, radishes, peas, and pansies for the spring time. Over the next several weeks, they will be giving way to the summer plantings which include tomatoes, peppers, herbs, eggplant, basils, chard, zinnias, begonias, and much more. Here’s a look at the plans for a couple of the different areas. 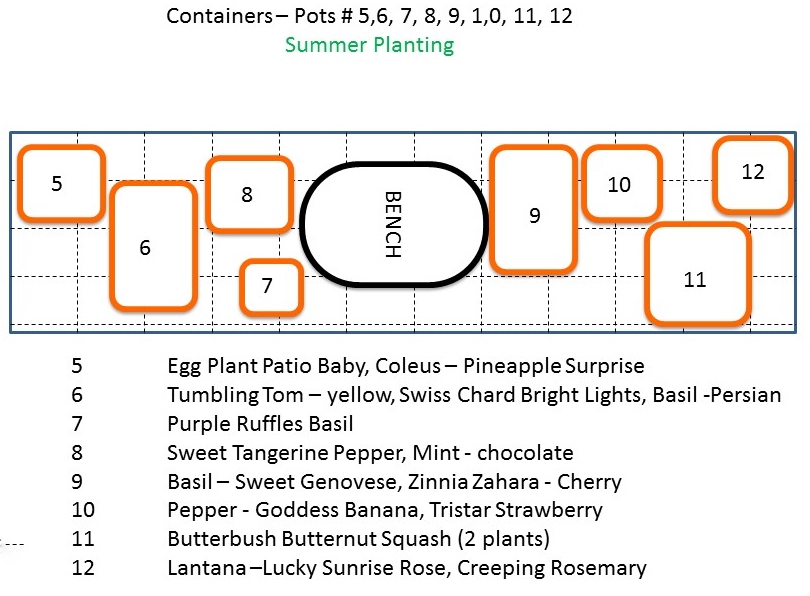 One thing that I think will be very interesting to see is the On the Deck Sweet Corn variety. It was developed for containers, but usually small plantings of corn do not pollinate well. It will be one of the the unique things to see for sure.

Just for fun, here’s a picture of one of the container groupings in the spring planting layout.

It’s been a few weeks since the last Friday PhotoEssay, and the garden has definitely changed.

I think the biggest change is simply the fact that while it is still a jungle out there, many of the tomatoes and vines are much more brown than green. The peppers are even starting to show some wear and tear. I think the only thing that is still unabashedly green is the luffa gourd vine…which has still not started blooming! 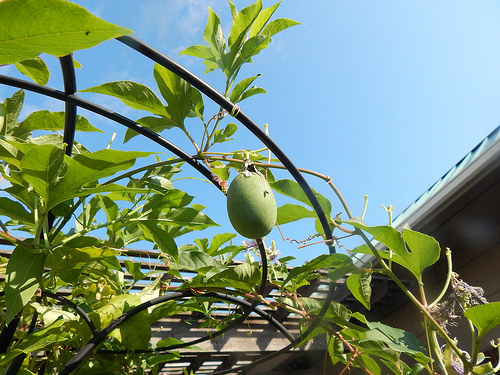 On the other hand, we planted the Passionflower vine for the flowers and caterpillars, but we do have some fruit set. I don’t know if it will ripen before it gets cold, but it’s still pretty neat to have fruit.

There was a point where I think we all felt like the Ginger bed wasn’t going to amount to much, but the plants have really done well! Clockwise from the left-most plant: Greater Galangal, Turmeric, Ginger, Cardamom. We are going to try digging the plants, potting them up, and keeping them for next year. 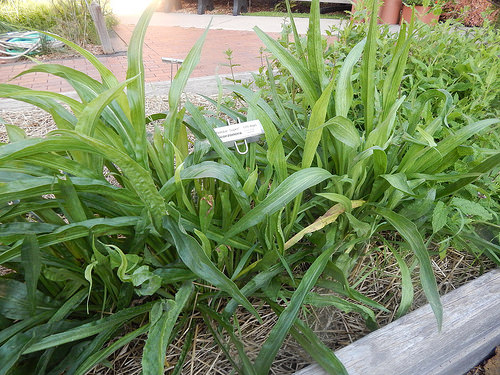 While the Black Scorzonera doesn’t look like much from the top, I’m actually very pleased with how the plants are doing. What remains to be seen is what the roots look like, but it typically isn’t harvested until after a couple frosts, so we have some time yet. 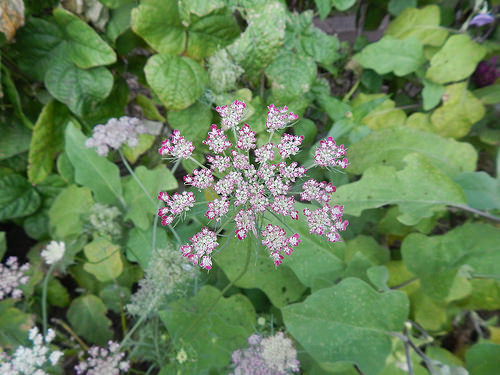 The flowering purple carrot / false Ammi from the Purple Garden has really started looking good. It took all season, but it has some nice flowers on it now. Because it’s technically a carrot that bolts easily, if we pulled it the roots should look like a poor quality purple carrot.

Our pollinator / herb garden is looking really good right now, although the milkweeds are getting a bit gangly. The zinnias in particular are very attractive. Now all we need is for the sages to be in full bloom!