When we have some less common veggies in the garden, I always try to cook something with a few of them to show how they might be used and to give them a fair taste test. Many of you know that I’m not a huge fan of eggplant, but I decided that I should give an eggplant dish a try anyway. I also made stewed okra and tomatoes, because I’ve never really cooked with okra before and wanted to try it in a form other than breaded and fried. 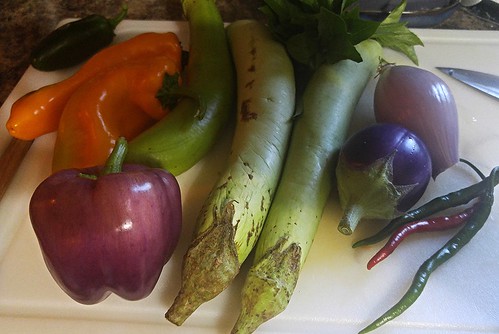 I like Thai food, and we had all the recipe and sauce ingredients on hand, so it worked out well. I used the green Oriental eggplant, the yellow ‘Escamillo’ sweet peppers and one of the purple sweet peppers, one of the Round Purple Asian eggplants, a red onion from my home garden, and a couple ‘Gong Bao’ peppers from my home garden in place of the serranos. I also used Thai basil rather than regular sweet basil. 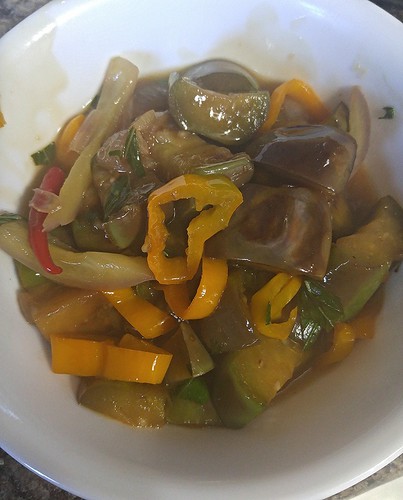 I found the sauce to be a little heavy, flavor-wise. It probably needed a bit more acid, maybe some lime juice. Overall, it wasn’t bad (for eggplant). The texture still isn’t my favorite, but it wasn’t completely distasteful.

Next up: Stewed Okra and Tomatoes 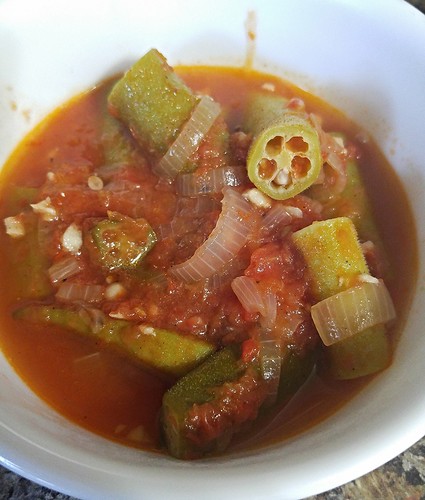 I used the okra and tomatoes from the garden, including some of the big okra that is larger than would typically be ideal. The ‘Ladyfinger’ okra that we are growing is supposed to be tender and usable even at larger sizes, so I wanted to test that out. I would say that it was nice and tender after the stewing, up to about 10″ long. After that, the pieces were still a bit fibrous and woody. I doubt a longer cook time would have solved the problem.

Both recipes were fairly easy, did a nice job featuring the vegetables, and were tasty. If you are looking for a recipe to use for eggplant or okra, give these a try!