As usual, we have a range of tomato varieties in the Demo Garden and not all of them have been spectacular performers. Others have been pleasant surprises. I haven’t had the opportunity to taste every variety this year, so the flavor information isn’t complete. However, in regard to general plant health and yield I feel like we have a pretty good idea for how the varieties are performing. 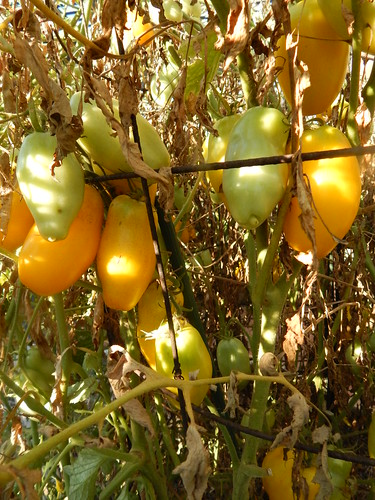 ‘Italian Gold’– This is an heirloom, yellow roma tomato. It was a last minute substitution, and I’ll admit to being skeptical. However, it is by far the most prolific variety in the garden. The flavor is actually slightly more acidic than I would typically expect from a yellow tomato. Is there something about yellow romas? We tried ‘Golden Rave’ roma a few years back to great success. The plant is a very vigorous indeterminate, and although the disease and spider mites are making the plant look ugly now, it hasn’t slowed production. 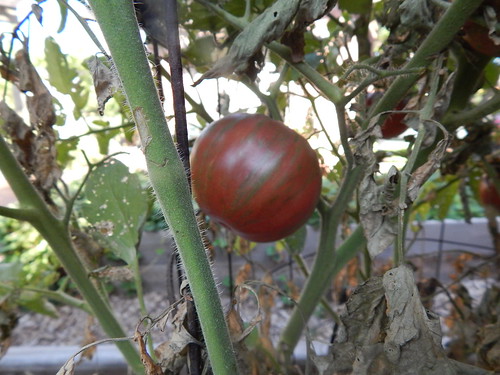 ‘Pink Berkeley Tie-Dye’ – This is a relatively new variety, but one that I would consider an “heirloom-type” tomato. It is open pollinated, but recent. However, it has color and flavor characteristics that you would consider heirloom. As you can kind of tell in this picture, the tomato is dark red/purple with green stripes. I love the stripes, but some people do find them off-putting. That said, the stripes are only skin deep! The flavor of this tomato is great, although it is rather prone to cracking. I don’t think the cracks have been worse than several of the other varieties though. I grew this at home last year and the yield was spectacular. These plants aren’t quite as good, but not too bad as far as yield goes. 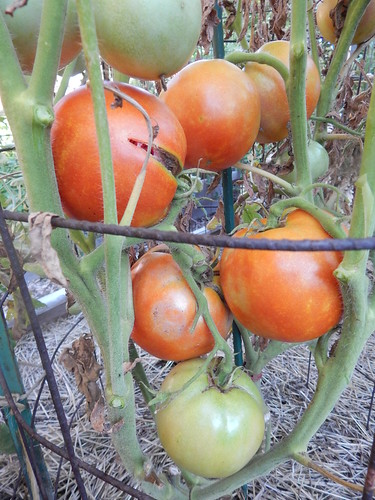 ‘Beefy Boy’ – This hybrid has great yields of large fruit. As you can see, there has been some cracking, but no more so than other similar varieties (i.e. – Celebrity, etc). I haven’t had a chance to specifically taste this variety, so I can’t vouch for flavor. 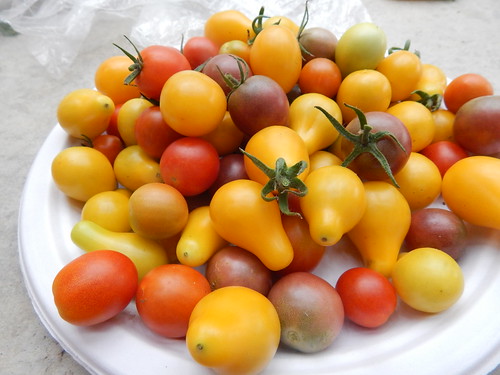 Cherry Tomatoes – ‘Yellow Pear,’ ‘Chocolate Cherry,’ and ‘Sweet Million’ are the three cherry tomatoes we have in the garden this year. Unfortunately, we had to remove the yellow pear due to a wilt disease, but the yield before it succumbed was great. Of course, flavor on all of these was good and we still have plenty of cherry tomatoes to harvest. 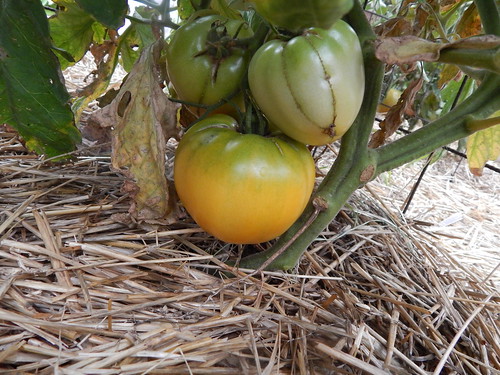 ‘Chef’s Choice Orange’ is a new variety that is also an All-America Selections winner for 2014. When fully ripe it has a beautiful orange color. It also has a very good flavor. I would consider it to be sweeter and milder than most red tomatoes, but perhaps more flavorful than your average yellow tomato. Our plants have performed very well. The vines are vigorous, but not too crazy, the fruit are good sized, and the yield has been good as well. Not as good as Beefy Boy (see above), but definitely on par with Celebrity (see below). Crack-wise…well…minimal to no cracks! That’s a win! 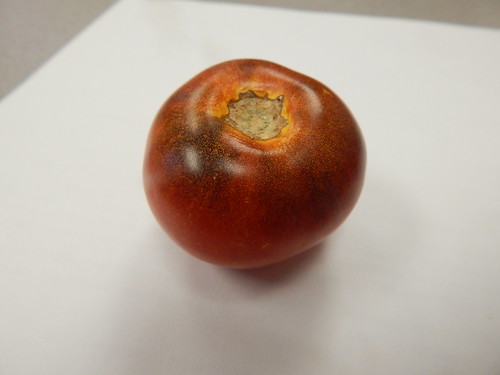 ‘Indigo Apple’ – This is one of the “Indigo” series tomatoes that has the purple/indigo pigmentation on the shoulders. This varieties produces 2-4 oz. fruit, so a little smaller than most tomatoes, but larger than a cherry tomato. We tried ‘Indigo Rose’ (a cherry tomato) in the garden a few years ago and were definitely under-whelmed by the flavor. Yuck! So I’ll be honest that when I was preparing to try this one, I was steeling myself for the “it’s a tomato but I really wish I hadn’t just eaten that” experience. BUT I was pleasantly surprised. It had a nice fresh, acid flavor. It wasn’t extremely sweet, nor was it extremely bland. Yield-wise it has been fairly productive and the plants look okay. No cracking that I’ve seen!

‘Celebrity’ – Most of you are probably familiar with this stand-by variety. Lots of people love it, although I’m not a huge fan. I feel like it cracks worse than it is worth, although everything comparable is cracking this year. The yield isn’t quite as good as ‘Beefy Boy’ (above), but it is better than the other red slicers.

‘Mountain Merit’ and ‘Phoenix’ – These are both determinate varieties that are supposed to be crack resistant and somewhat heat tolerant. Both varieties have one plant that is small and looks awful with no production after the first flush of fruit. The other plant of both varieties is larger and still producing a bit. Both varieties are coated with spider mites. I haven’t tasted either of these, but the yields are lower than other varieties. That said, because the plants are smaller you should be able to plant more of them in the same amount of space, resulting in higher potential total yield. I can’t definitely report on the crack resistance…the few fruit still on the plants look a little bit better than ‘Beefy Boy’ and ‘Celebrity.’

Are you trying any different tomato varieties this year? What’s doing well for you?

Posted on August 14, 2015, in Around the Garden, Plant & Garden Reviews and tagged Tomatoes. Bookmark the permalink. Leave a comment.