This week brought more planting – namely the peppers and tomatoes!

The tomatoes are already caged, but not yet mulched.

Only 4 peppers this year.

Hey! What is that? Looks like a elm seedling. Oh, you thought I was referring to the strawberry? 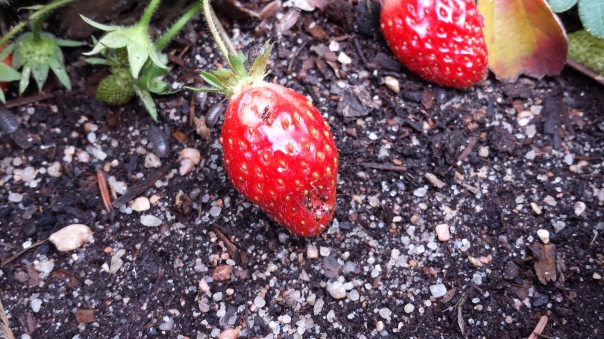 So there are a couple strawberries starting to ripen from last year’s planting. This one has been sampled by the roly polys. Ugh! There isn’t anything to do about them other than try to keep things dry. Hard to do this week! The one nice berry I found tasted like a ‘Mara des Bois’ – sweet and floral.

The majority of the beans that were planted didn’t grow well from the first planting, nor the second. They are missing leaves or have damaged leaves. There is a bit of difference between varieties though. It could be a few different things. We had this issue last year, and I thought it might be herbicide. A little more research this year indicates it could also be a bean/seed corn maggot or a disease. Basically, something is damaging the hypocotyl of the seed as it is germinating and results in plants with no leaves. Obviously they aren’t going to grow much from that!

The easiest fix for either of these problems is to till up the area and then replant when the soil is warmer. That worked last year, so hopefully it will work this year too.

This variety – ‘Contender,’ I believe, seems to be mostly okay. I suspect it may be more tolerant of cold soils. ‘Contender’ is an old variety, and sometimes the old ones are the best ones!

We’ll wrap up for the week with a picture of the whole garden! Things are only going to accelerate from here!

Posted on May 8, 2015, in Around the Garden, PhotoEssays, Planting Time, Working in the Garden and tagged beans, insects, peppers, plant problems, planting, Spring, strawberries, Tomatoes, weather. Bookmark the permalink. Leave a comment.