We had one of almost every tomato ripe in the garden this week, which allowed us to taste all of them and compare. Not all of them were perfectly ripe – some were a little over-ripe and others were a little under-ripe, so our opinions could change with more ideal ripeness on some of these varieties. 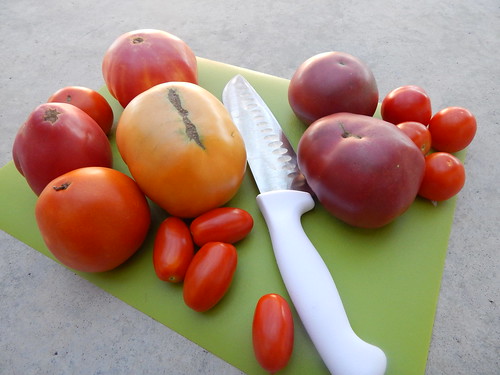 Interestingly, the 3 varieties that we didn’t have any to taste were the romas: Opalka, MiRoma, and Golden Fresh Salsa. We’ll have to give them a try later on. 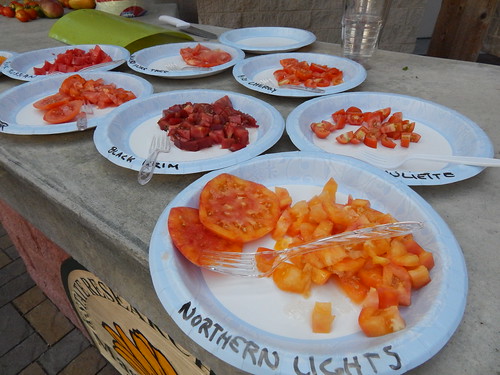 We tasted Northern Lights, Black Krim, Juliet, Large Red Cherry, Jetstar, Silvery Fir Tree, Pink Russian, and Amana Orange. The red tomatoes: Juliet, LR Cherry, Jetstar, and Silvery Fir Tree were pretty much all under ripe, and they looked pretty pale to me when I cut into them. My eyes might also be really attuned to purple tomatoes, which make everything look pale. 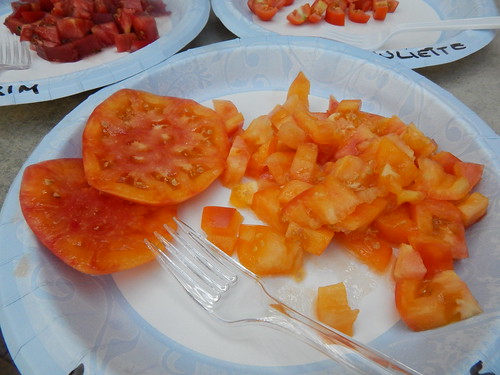 I’m in love with the Northern Lights tomatoes, just because they are so pretty! I’ve picked several at home, and the largest weighs in at 1 lb 6 oz. The smallest are about 8 oz. The flavor is pretty good, and not too acidic. You will probably have to suffer through several more pictures for the rest of the summer. 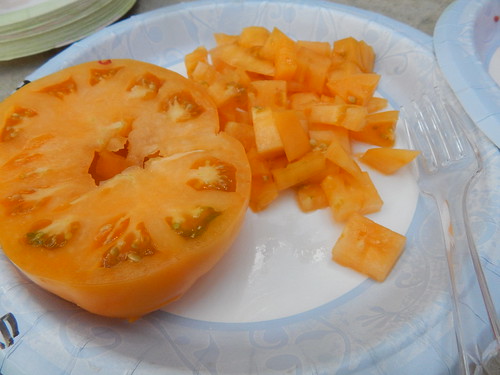 This is the Amana Orange. I thought that it seemed a little under-ripe, but almost everyone liked the flavor. My guess would be that if it was a day or two riper, it would probably be a little less acidic. 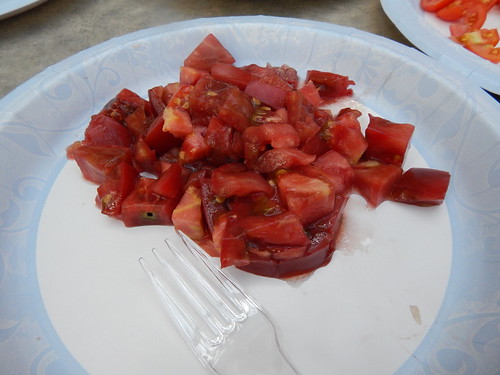 This is Black Krim. It is a darker red/purple/brown tomato that tends to be prone to cracking. The flavor didn’t knock most people’s socks off, although it wasn’t bad. I think this tomato was perhaps a bit over-ripe, which could be part of the problem. 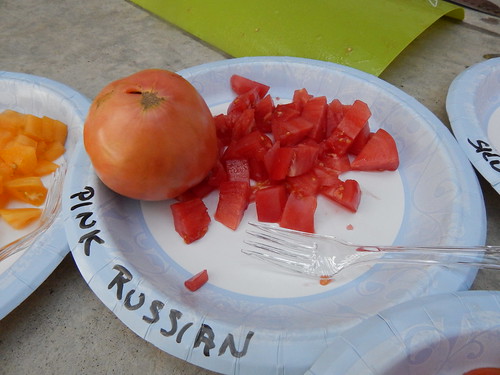 Obviously Pink Russian. As you can see, the chopped tomato on the plate is much darker than the other one that was harvested on Tuesday. I think the darker one was a bit past ripe, while the just picked one is a bit under. This one got rave reviews for…not tasting very good at all! We’ll have to try another one to see if it was ripeness or variety. It was pretty bland and mealy. Yuck!

I didn’t get pictures of all the red tomatoes, but I think the general opinion of both the Silvery Fir Tree and Large Red Cherry was that they had mediocre flavor at best.

Have you harvested any tomatoes yet? How do they taste?

Posted on July 16, 2014, in Around the Garden, Harvesting & Eating, Plant & Garden Reviews and tagged harvest, Tomatoes. Bookmark the permalink. Leave a comment.