Since I haven’t been very good about regular updates this summer, I figure it is about time I start doing some “Year in Review” posts to look at how certain groups of plants or garden beds did for us this year. The easiest and best place to start is the tomato garden!

We had a bunch of heirlooms in our Tomato Garden this year, and we had Master Gardeners plant them in their home gardens as well to give us more information. I had some of the varieties in my home garden too, so the information isn’t going to be strictly based on what we saw here in the Demo Garden, but kind of a combination of all that information.

‘Silvery Fir Tree’ – This heirloom was determinate, 3-4 oz. red fruit, purportedly 52 days to first harvest, and had cool silvery and kind of fine foliage. The general consensus was that while it was relatively early, the yield wasn’t very good and the flavor was even worse. Not much to recommend this one!

‘Large Red Cherry’ – This was an heirloom cherry tomato that we put on the trellis. The fruit was about 2 oz, which is large for a cherry tomato. Our vines in the Demo Garden were diseased pretty early in the season, so they never really produced well or looked healthy compared to others. Some of our Master Gardeners that tried this variety raved about it and how productive it was. I didn’t find the flavor to be particularly good or particularly objectionable, but others liked it. Worth a try, especially if you like large cherry tomatoes. 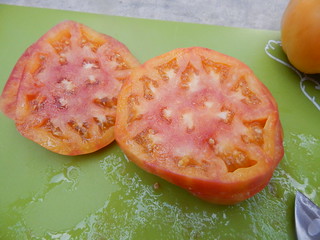 ‘Northern Lights’ – One of the reasons we chose this bi-color heirloom was because it was supposed to reach first harvest in 54 days with up to 1 lb. fruit. Well…it didn’t hit that mark, and wasn’t even the first variety ripe. It was relatively early, with first harvest the week after July 4th, but most of our varieties were much earlier than the days to maturity would indicate this year. I also have to be honest – I LOVE this tomato. I love the color, the fruit size, and the flavor. It is a little milder than some varieties, which I like. I had this one at home as well, and it averaged close to 1 lb. fruit most of the season. We had almost 100 lbs of tomatoes from 4 plants, which was pretty impressive. It also DID NOT CRACK. At all. Which in itself is pretty impressive for Kansas, especially when we had rainy and dry periods. I would like to see how it performs in a more normal Kansas summer, but it was great this year. I personally would highly recommend this one. Based strictly on our Demo Garden results, I would probably give it a recommended rating.

‘Pink Russian 117’ – This was a pink skinned and fleshed oxheart tomato. While I did hear some rave reviews of the flavor, a couple different times when we did taste testing it was rated as pretty bland and mealy compared to the other heirlooms. I think the ripeness really plays a role in its flavor. If it gets a little over-ripe, the flavor and texture go downhill quickly. In the Demo Garden, it wasn’t very early to start producing, but it wasn’t incredibly late either. The earlier yield was decent, but tapered off quite a bit. At home I just had one plant, and the first harvest was about 2-3 weeks later than other varieties. The yield was pretty minimal, especially compared to the other heirlooms, but I wasn’t concerned because the flavor wasn’t as good either. Not recommended. If you want a pink tomato or an oxheart shape, there are probably better options out there.

‘Amana Orange’ – This orange beefsteak was a variety that I was a little skeptical of because it was listed as 85-90 days to harvest. In a hot 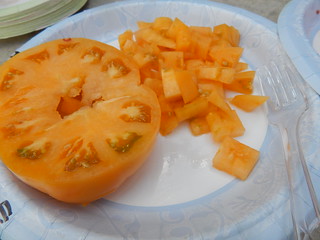 summer, that could have been a death knell for this variety as it probably wouldn’t have set fruit before it got too hot to set. This year, it was producing well before the 70-75 day mark, so I don’t know if that is courtesy to the strange summer or due to how the variety performs in Kansas! Everyone generally liked the flavor, although it wasn’t as mild as Northern Lights nor as strong as the Black Krim. Based on the Demo Garden alone, I would call the yield pretty average. I know that other Master Gardeners with this variety at home reported good yields. I would rate this one somewhere between “worth a try” and “recommended” because I’m still a little skeptical about the days to maturity and how that would play out in a hotter summer.

‘Black Krim’ – This is the purple/black/brown variety, and I really do like purple tomatoes. They seem to have a little something extra when it comes to flavor, and Black Krim is no 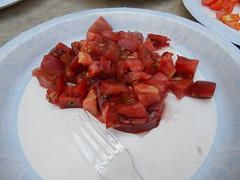 exception. The flavor was great! Another common characteristic of this variety, unfortunately, is the concentric cracking on the stem end, and that was evident this year as well. The real key with cracking is to pick the tomatoes before they reach full ripeness, which generally mitigates most of the cracking. We also had this variety at home, and it did very well. The yield was very good, especially for an heirloom, it produced early and consistently, and tasted great. As an earlier variety, it should produce some in most Kansas summers. Highly recommended.

‘Opalka’ – I’m really torn about this variety. There were things I liked and thing I didn’t. Once again, the plants in the Demo Garden succumbed to disease early, so we didn’t get a great look at them. The plant I had at home was still a mixed bag. The fruit was quite late, and the plant didn’t 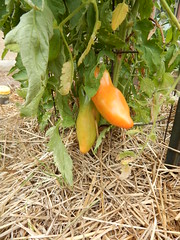 Opalka, not yet ripe

really seem to hit its stride until August. The yield was tolerable, but nothing compared to the hybrid romas I had  growing. However, most of the fruit were HUGE! I mean…1 cup of tomato sauce from a single tomato? That’s crazy! The texture and flavor were also really nice for cooking. They definitely weren’t as firm as the hybrids, but that’s not necessarily a bad thing. So…if you want huge, novelty romas, this would be a fun variety to try. If you want to do lots of canning, probably not a great choice. I will also say that I had grown this variety before, and it was nothing like this before, so one packet of seeds or the other was not true to type, and I don’t know which one was! Ah, the joys of growing heirlooms.

We did have some hybrids in the garden this year as well, but we’ll take a look at them in another post.

Posted on October 16, 2014, in Around the Garden, Plant & Garden Reviews and tagged Tomatoes. Bookmark the permalink. Leave a comment.