Insects on the Grape Vine

This is a good example of why it is worth it to take a closer look when you see something abnormal going on in your garden. I was out in the garden a few days ago and noticed that there were a few leaves on the grape vine turning brown. I kind of mentally shrugged and figured that maybe a few spider mites or something was happening or maybe just a little leaf drop in the later part of the season. 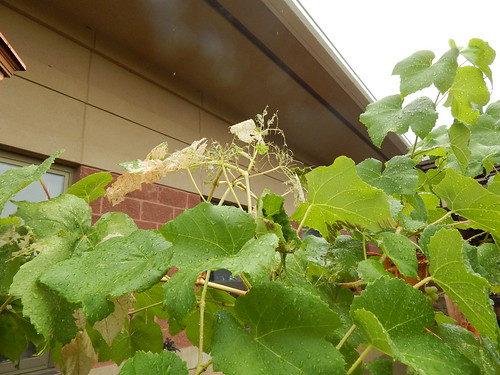 I noticed it again yesterday as I walked by, and then did a double take when I realized there were leaves that looked chewed on. Oops. Then I took a closer look and found two things going on. 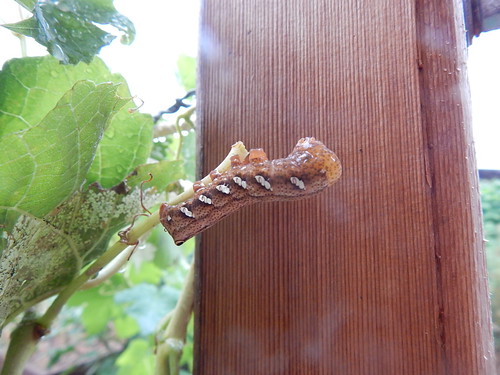 This dude is a sphinx moth caterpillar, happily munching on the end of the shoot. Although he is eating quite a bit, I’m not concerned that he will kill the plant and just decided to leave him alone. If you look on the left side of the picture, you will also see some other insect feeding damage, but that wasn’t done by this guy. 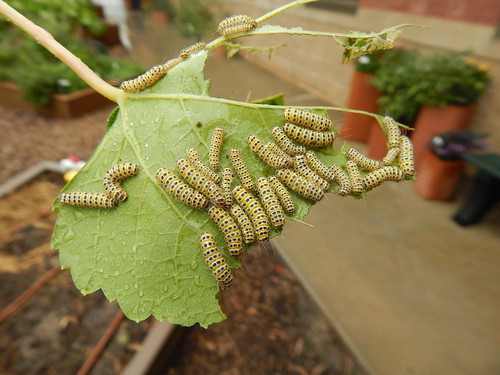 Oh no, all that damage was done by these cute little larvae. I suspect they are either grape sawfly or grapeleaf skeletonizer, based on their appearance, but I haven’t had time to do any more research. One of the Extension articles suggested picking off the leaves with the larvae on them, because grapes don’t mind a little leaf thinning. I picked about 10 leaves off that were heavily infested and we’ll see if that stems most of the problem.

I doubt that they would seriously damage the vine at this time of year, but it is still a good thing we caught them before the whole plant was munched up!