The general recommendation for planting a fall garden is to plant most vegetables starting in late July through mid-August. A few vegetables that need colder temperatures and grow quickly, such as lettuce, radishes, spinach, and turnips are generally planted from mid-August to mid-September. However, sometimes the summer weather does not recommend itself to those planting ranges.

When the weather in late July or early August is very hot and dry, it may be preferable to wait to plant many fall crops for a couple of weeks, even though that may delay harvest or result in smaller harvests. The heat can make it extremely difficult to germinate seeds successfully outdoors. It can also be a challenge to establish transplants at that time. It is important to watch the weather closely and be ready to plant as soon as there is a slight break in hot weather. Even if the daytime highs are still hot, when the overnight temperatures drop below 70 degrees, most fall vegetables will be able to survive.

If the weather is not favorable in the late summer, it is still possible to plant many fall vegetables later than the general recommendations. The success of these plantings depends on how long mild fall weather persists. Often we do not have consistently cold temperatures until mid-November, giving many vegetables extra time to mature if planted late. Row covers can also keep plants warmer to promote continued growth.

Vegetables that mature quickly, such as radishes, lettuce, and other salad greens, can be planted multiple times over the course of 6+ weeks to provide harvests throughout the fall. Seeds planted in late August will grow quickly, while seeds planted in late September will typically be slower growing. To successfully stagger crops, you should plant 1 week apart in August and stretch that out to 2 weeks apart by late September. Using both transplanting and direct seeding will also help stagger your harvests of these vegetables. 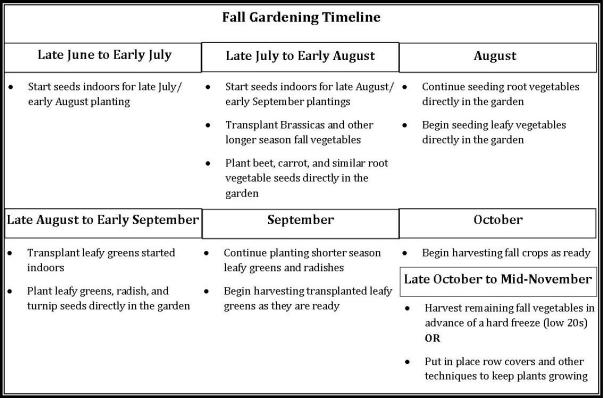