So raspberries are not something  you plant in a small space…or a space where you’ll have a hard time keeping them under control. The reason for this rule is that raspberries spread their roots underground…to pretty much any place that they can get their roots. Then you have new shoots popping up…sometimes just barely outside the “zone” and sometimes quite a distance away. 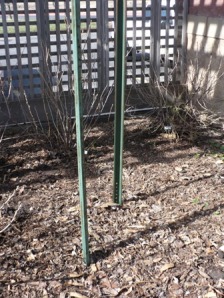 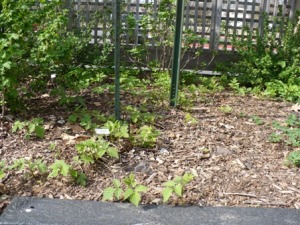 Bang! 10 days later, there are new raspberry shoots growing…but not in a neat spot. They are along the front edge, along the back edge, in the middle of the strawberries, surrounding the currant bushes…pretty much anywhere.

After some judicious “weeding,” I think they might be manageable…at least for a little while! We’ll probably have to beat back new shoots regularly this summer…and next…and forever…

Honestly, I’m beginning to wonder if the best way for a homeowner to grow raspberries (and keep them more easily under control) is to plant them in a raised bed – maybe only 3 feet wide – with weed barrier fabric underneath it. Of course, the raised bed would have to be dedicated exclusively to raspberries, but they are so worth it!

Posted on April 8, 2010, in Around the Garden and tagged berries, Spring, weeds. Bookmark the permalink. 1 Comment.