It’s time to start our regular Friday reviews of the Demonstration Garden! 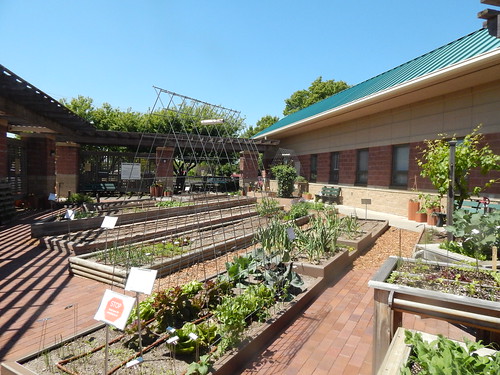 We have more growing in the garden than some years at this time. Except for the tomato and vertical gardens, which are empty, most of the other areas have lettuces, other leafy greens, peas, or root veggies.

We had our first harvest of many of our leafy greens this week. This is the Elegance Greens Mix from the Grocery Garden. It got a little bigger than I prefer for salads, but we will be trying to stay on top of harvesting moving forward. Watch for harvest updates and track our produce value from the Grocery Garden as the season progresses.

The green sprouting broccoli that is in one of our barrel planters has enjoyed the cool weather and is looking great. It isn’t showing signs of heading yet, but I expect it will be soon. Another boon of the cool weather is that the cabbageworms aren’t around either!

In what may be the first live demonstration of the challenges of growing heirlooms, this ‘Brown Dutch’ heirloom lettuce in the Colonial Garden is already starting to bolt. It is most likely reacting to the temperature fluctuations from warm to cold. But for whatever reason, this variety is not as tolerant to that and more prone to bolt.

The pallet garden we planted last year to strawberries is back up and growing. It is flowering and setting fruit. I don’t love the fact that the plants are so small. I think they are probably showing the lack of nutrients available to them in the pallet, and I don’t know that fertilizing right now is going to improve the fruit. It will be important for plant health if we want to keep it going for next season though. Now…how to fertilize and keep the nutrients where we put them? Ah, the challenges of pallets!

The Japanese bunching onions and carrots that we overwintered were harvested this week. The carrots weren’t in great condition. I think that overwintered carrots are best harvested in January or February, before it starts getting too warm!

Our poor tomatoes, peppers, and eggplant are still waiting to be planted. It has just been TOO COLD. With the early, warm temps 6-8 weeks ago, we started thinking early spring. But the reality is that the temperatures in the past two weeks have been too cold for these plants to be outside without suffering cold injury. We are hoping to plant tomatoes this next week and the peppers in two weeks.

This garden bed is very different from anything we’ve ever done before. We have split the garden into two sections, with one end featuring plants which can be used for dye (as well as eating or pollinators or ornamentals) and the other end will have heirlooms, with an emphasis on plants and varieties that would have been available during the late 1700s and early 1800s.

We also have garlic that is already planted in the two central square tiers of the raised bed.

In the Dye section, we have planned to have the Turmeric that we started in the garden last year and have overwintered. We will have a purple basil, rose mallow (hibiscus), and a sunflower called ‘Hopi Dye’ that is supposed to produce purple dye from the seeds! We will also be trying meadowsweet and Japanese indigo. The calendula will be in the garden for the spring, then done for the rest of the year.

In the fall, the garlic will be replaced with onions, beets, and carrots, which can also be used for dye.

The Colonial Garden, you will notice, is heavily focused on root vegetables, leafy greens, and vines. Our most popular garden vegetables – tomatoes, peppers, etc – were either not in vogue yet or still considered to be toxic!

So in the spring, we are trying out two heirloom cabbages as well as three types of lettuces that there are records of Thomas Jefferson planting at Monticello. We will also have a type of salsify and a parsnip variety, as root vegetables were important food sources. On the trellis we will have a pea in the spring, and then an heirloom melon and squash for the summer.

In the fall, we will be planting an heirloom leek, an heirloom “prickly seeded” spinach, and a less common leafy green called corn salad.

As we have many comparable vegetables in other parts of the garden that are modern varieties, it will be very interesting to see how these older varieties compare.

Another Look at the Grafted and Non-Grafted Heirloom Tomatoes

On getting back to work this week, some of the differences between the grafted and non-grafted heirlooms have become increasingly apparent.

This is the view of the non-grafted part of the bed. The two plants on the end aren’t bad, but the next 4 grafted plants in line have withered to almost nothing. In fact, we did yank them out after I took this picture. They obviously weren’t going to produce anything, so it was time to go!

Looking the other direction, the grafted heirlooms are just a bit too healthy. (The brown, crispy plant on the right side is one of the non-grafted plants.) Of course, the healthy plants don’t seem to have many tomatoes either that I could see. But they at least have the potential to produce tomatoes! That’s a step in the right direction.

I rather suspect that there are some tomatoes on the grafted plants, but it’s hard to see them in that jungle. (I just justified that suspicion by going out and finding a ripe Marmande hidden in the jumble of leaves.)

Posted in Around the Garden, Plant Problems & Diseases

You know how it never rains but it pours? I keep thinking we should be able to space out our projects a little more in the garden, but usually, once we are on a roll, we just keep going. We did lots of things in the garden today, so I’ll be posting about that all week.

One thing new we did this week was pruning the suckers off the heirloom tomatoes in the trial. The plants have really grown a lot, and since they are spaced a little closer together, we are taking off all the suckers below the first flower cluster.

Here’s one of the plants before its suckers get pruned off. It is definitely full and bushy, with some large suckers. Ideally, you would prune off the suckers before they get this large, because it is less shocking to the plants.

Here you can see the suckers a little better. They are the very large, upright shoots growing off the main stem, rather than the mostly horizontal leaves.

This is the same plant after the pruning is finished. You can see we accidentally broke one of the regular leaves in the process – one good reason to prune earlier when the suckers are smaller.

We did find flowers or buds on almost all of the heirloom tomatoes today, so I’m glad we chose the shorter day varieties!

If you are wondering why we pruned the heirlooms, there are a few good reason.

1. They are planted only 24″ apart, which is close for indeterminate plants. Pruning will help improve the airflow for these plants, reducing some of the disease pressure.

2. The heirlooms are very vigorous growers, so the pruning will help keep them under control a bit more.

3. Yes, the suckers would produce some tomatoes, but by removing the suckers, the plant will put more energy into the other fruit, so the other tomatoes might be a little larger. The total yield for each plant will be virtually the same.

We also put the third level of twine on the heirlooms. They had grown a lot and were definitely ready for it.