Squash plants love the hot summer sun, and Kansas has plenty of it! Any vegetable gardener in the state who has been growing for very long will likely have planted some variety of squash. There are a few issues that can pop up when growing squash, but overall, it is usually pretty easy to grow.

In the Demo garden, we are growing both summer squash and winter squash. Contrary to what the names imply, both types of squash are grown during the heat of summer; one main difference is that summer squash is grown for its young or immature fruit (think zucchini), while winter squash is grown for its fully mature fruit, so it takes longer to be ready (think butternut squash or pumpkins).

Summer squash grows in a bushy shape and is generally ready to harvest by mid-summer. When harvested at small sizes, they have a soft, thin skin and unsubstantial seeds and can be eaten raw. If left on the plant to grow very large, though, they become tough and too bitter to eat raw. The most popular types of summer squash are zucchini and yellow squash, but other types include pattypan and tromboncino.

We have two varieties of summer squash in the demo garden, and both are varieties of zucchini: ‘49er’ and ‘Astia,’ which both are beginning to yield a harvest.

‘49er’ is a yellow zucchini which has about 50 days to maturity (DTM), and ‘Astia’ is a dark green zucchini with 48 DTM. Both are best harvested at about 5-6 inches long. (Yellow squash and yellow varieties of zucchini are similar, but different; zucchini maintains a relatively consistent diameter, whereas yellow squash is broader at one end and tapers toward the other, and often has a slightly thicker skin than zucchini.)

Winter squash generally has a vining nature and needs either lots of space to sprawl out or a trellis to grow vertically when space is at a premium. Because it is harvested when fully mature, it has a tougher skin than summer squash that is not usually eaten. Winter squash is usually ready to harvest late summer or early fall. One of the benefits of growing winter squash is that it can store well, even through the winter months. The winter squash in the demo garden (‘Waltham’ butternut and ‘Autumn Frost’ acorn squash varieties) are setting fruit but won’t be ready to harvest for several more weeks. We’ll keep you posted!

A couple of the biggest challenges with growing squash are the squash vine borer and the squash bug.  Both of these insects can wreak significant havoc and are taking their toll now in the Demo garden.

The classic symptom of squash vine borer is a wilted plant when the plant has been watered well and shouldn’t be drooping. Upon closer inspection, you may be able to see that the stem has small holes or is chewed up close to the ground with larvae frass at the base. At this point, it is important to remove the larvae by either disposing of the plant completely, or, if you’re feeling surgical, slitting the vine with a sharp knife until you find the larvae and then removing it. The slit vine can be placed back in the soil and kept moist in the hopes that it will send off new roots, but some plants may have been damaged beyond repair and won’t recover from the “surgery.” If the larvae are not removed and are allowed to complete their life cycles in your garden (in which they eat their way out of the stem, burrow 1-2 inches into the soil, and wait in a cocoon until the next season), the problem will likely return next year. Once you have squash vine borers, there is not a whole lot you can do; to learn about treatment options and cultural controls, see this helpful publication.

Another pest we are facing in the Demo garden is squash bugs. Adults look similar to stink bugs and can be found on many species of the cucurbit family, but squash is their favorite. Adults and nymphs (which are lighter grey with black legs) cause damage by sucking out juices from plant leaves, resulting in yellowing, wilting, and death of the plant when populations are large. Squash bug eggs can be found by scouting on the under sides of leaves – they are glossy brown and laid in groups in between leaf veins. These eggs can be scraped off and disposed of to help control, but here in the Demo garden, the problem has passed the egg stage, and we have begun chemical control to limit the damage. Squash bugs are best controlled at the nymph stage, since adults have a hard shell that protects them from pesticides. We have applied one round of spinosad by spraying it on the vine and branches where the nymphs are congregating. We won’t be able to harvest zucchini for at least three days after spraying, and depending on what the squash bug population looks like after the application, we may spray again in about a week. We use chemicals sparingly in the Demo garden, which are safe when used appropriately. As always… when using chemical pesticides, make sure read and follow the label! To learn more about squash bugs, click here.

One last issue we had with the zucchini earlier this year was small fruit (around 3 inches) that shriveled up or rotted from the blossom end of the fruit before coming to harvestable size. This symptom can be due to a couple of different culprits, but is ultimately related to an issue with pollination.

Sometimes high temperatures following a mild or cool spell can limit the number of pollinators that are active in the garden; sometimes over-fertilization (high nitrogen levels) in the soil can cause the plant to produce too many male flowers; and sometimes plants don’t produce enough male and female flowers at the same time to ensure enough pollination (this issue usually resolves itself as the season progresses.)

We stepped in to lend our zucchini plants a pollinating hand, and you can too if you see this issue in your garden – it is as simple as taking the pollen from the male flowers and transferring it to the female flowers. First, identify which flowers are female and which are male; female flowers often have a swelling behind the flower head where the fruit is barely beginning to form, whereas male flowers have a straight stem behind the flower head. Another, perhaps more reliable way to tell is to look inside the flower: the female has a stigma which is larger and slightly round or bulbous, and the male has a single, straight appendage – the anther – inside the flower.

Hand-pollinating can easily be done by using a small artist-sized paint brush to transfer pollen from the male to the female flowers; lightly touch the tip of the brush to the anther on a male flower and dab the pollen that the brush picked up onto the stigma of a female flower.

With a couple hand-pollinating sessions, a relative evening-out of temperature, and an uptick in pollinators in the garden, our zucchini are now producing harvestable fruit. Now it’s a matter of fending off the squash bugs so that we can keep harvesting this delicious summer garden staple!

Another week, another downpour, more squash bugs and spider mites! This gardening season has certainly come with its share of challenges in the Demo Garden, and I’m sure you are experiencing the same things at home. 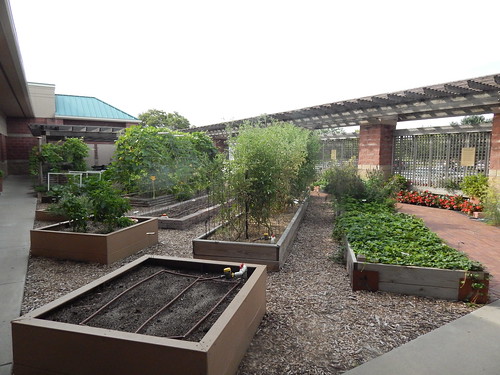 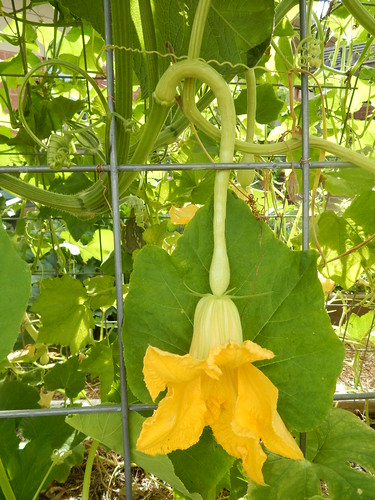 The ‘Tromboncino’ squash are still producing steadily. I prefer that over getting too many zucchini! I captured this image this morning while the squash blossoms were still open. Female squash flowers have the immature fruit behind the flower and then the fruit continues to develop following pollination. I thought it was pretty neat to see how big the squash is already in this case, even before pollination! You could even harvest the squash at this point and stuff the flower with cheeses and herbs, then saute as is. 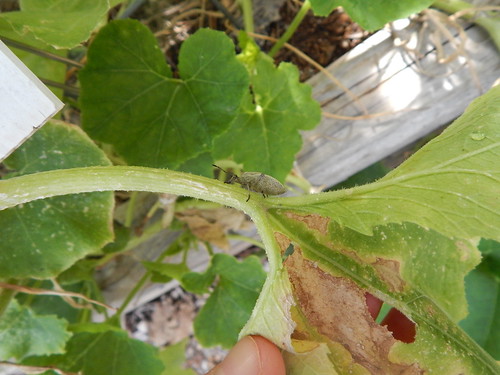 We are starting to see more squash bugs on the trellised squash. It isn’t unexpected, but nice that it held off until now. We are picking off eggs and nymphs as we see them as well as spraying once a week. We have also seen a couple of vine borers that our Master Gardeners caught early and tried the “surgery” method of cutting them out of the stems. So far we have no casualties of squash vine borers, which is a win in my book! 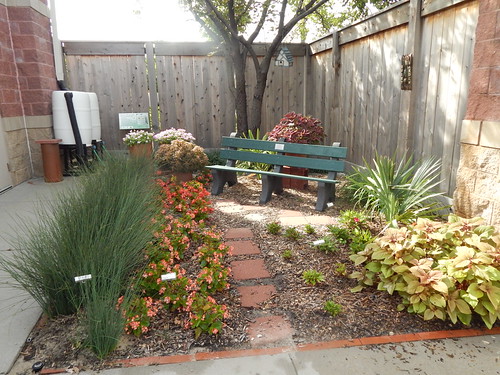 Our Quiet Garden area is looking beautiful right now. There are several coleus, begonia, and impatiens varieties that are showing their colors in good form. These are all varieties that are either on our Prairie Star list of recommended annuals or they are in the trial right now to determine if they are worthy of being on the list. 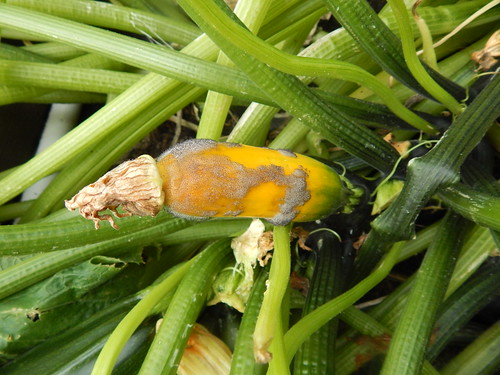 I noticed a few squash in the zucchini area that are showing this grey mold. It looks like it is primarily on squash that were not successfully pollinated, thus being more likely to rot. That predisposition to rot, combined with the rain this week and the density of the stems and leaves has probably resulted in the grey mold. The best thing to do is to just remove squash like this ASAP to prevent the mold spreading to other squash or the stems. 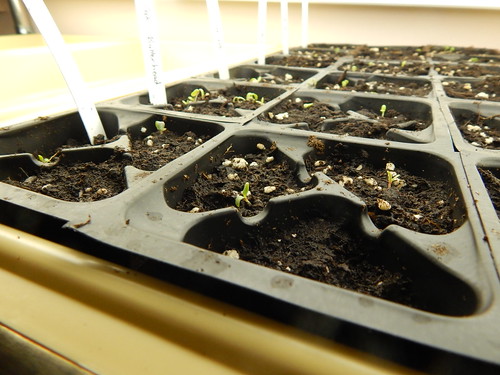 The Master Gardeners planted some lettuce seeds for transplanting outside later this month. Starting the seeds indoors and transplanting is one way to make lettuce available to harvest earlier in the fall than if we were to wait until the weather is cool enough to plant seeds outdoors. I usually plan on about 4 weeks from when we plant seeds to when the plants are ready to go out in the garden. 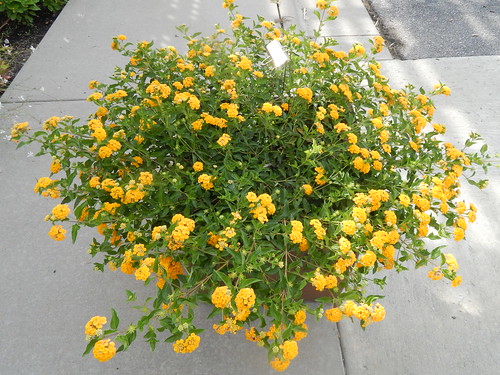 This is ‘New Gold’ Lantana that is planted in the containers near the garden entrance. It is looking spectacular right now! This variety is on our Prairie Star Annuals list as a variety that thrives in Kansas and blooms consistently all summer. It definitely looks like a winner this year.