We harvested our first veggies of the season this week! In fact, the French Breakfast Radishes really could have been harvested last week, but I wanted to leave them in for Herb Day. 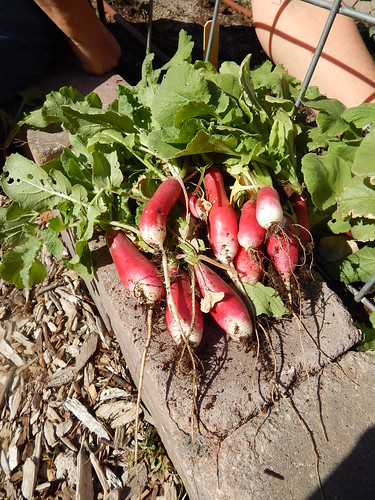 The radishes were definitely good sized! They were also growing up out of the ground, which drew quite a bit of attention to them. 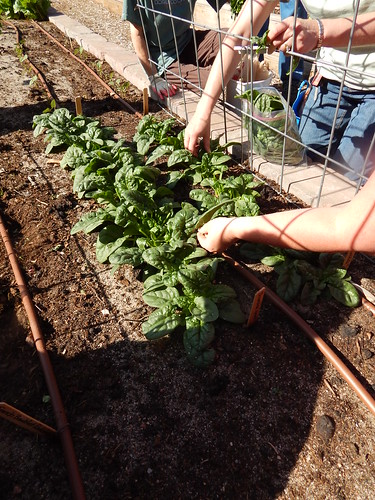 The spinach that was next to the (now pulled) radishes was also getting big and ready to harvest. We harvested a couple bags of spinach leaves from these two 4 foot rows! 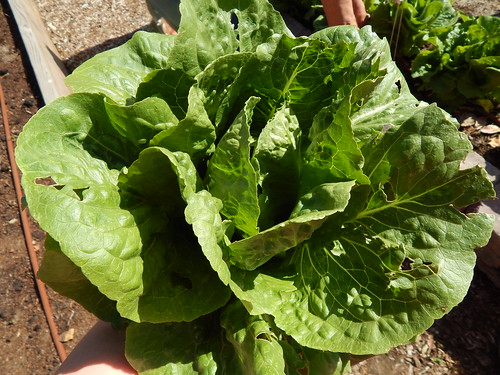 Also on the docket was the romaine lettuce that we transplanted in March. We only harvested half of the heads, cutting them off at the soil level. We harvested every other head, so the others will have a little more space to grow for a week or two.

We also harvested a little bit of spinach and mustard from the Indian garden and some of the Endive/Escarole mesclun from the Italian garden. I now need to come up with a recipe to try with both of those! 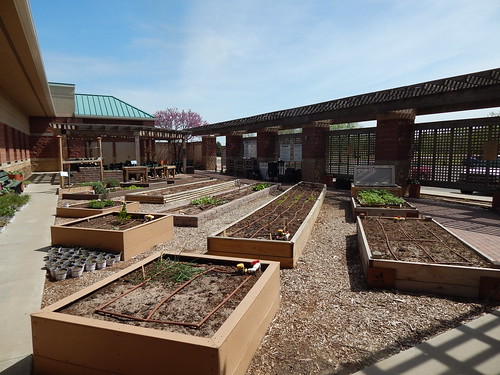 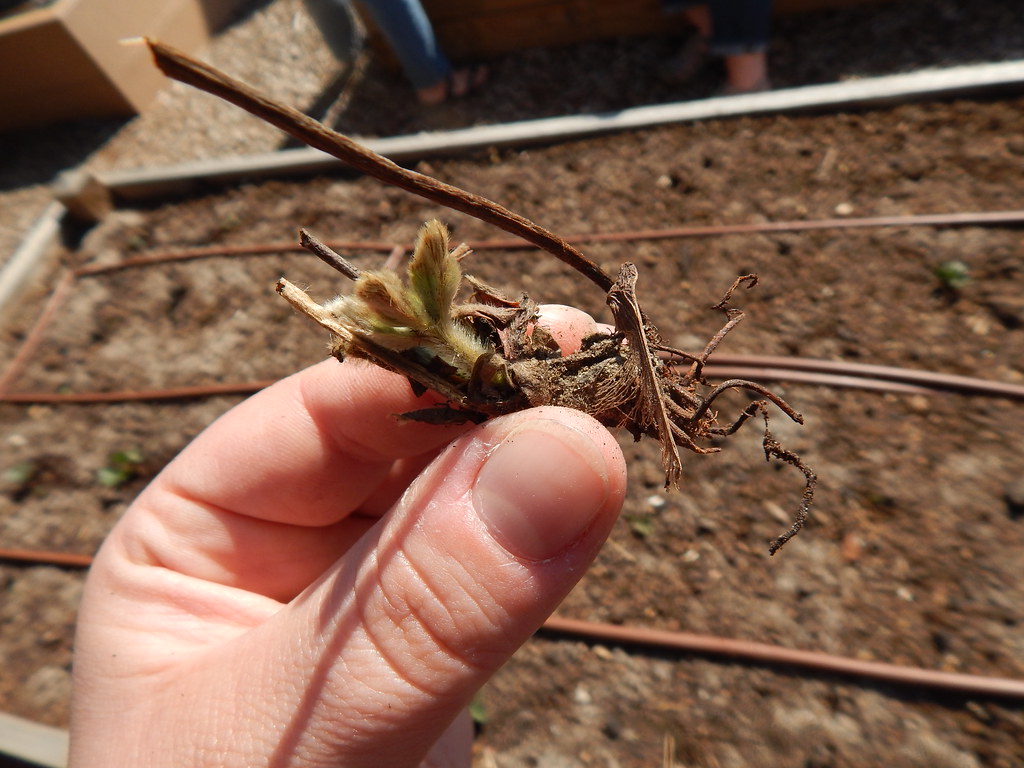 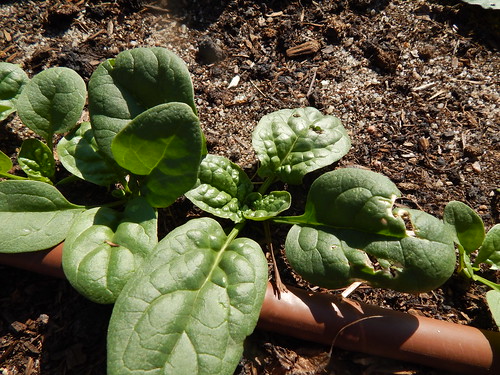 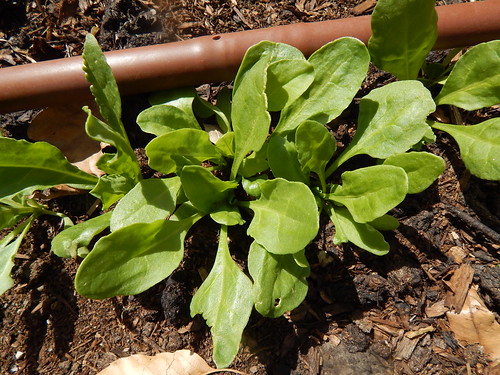 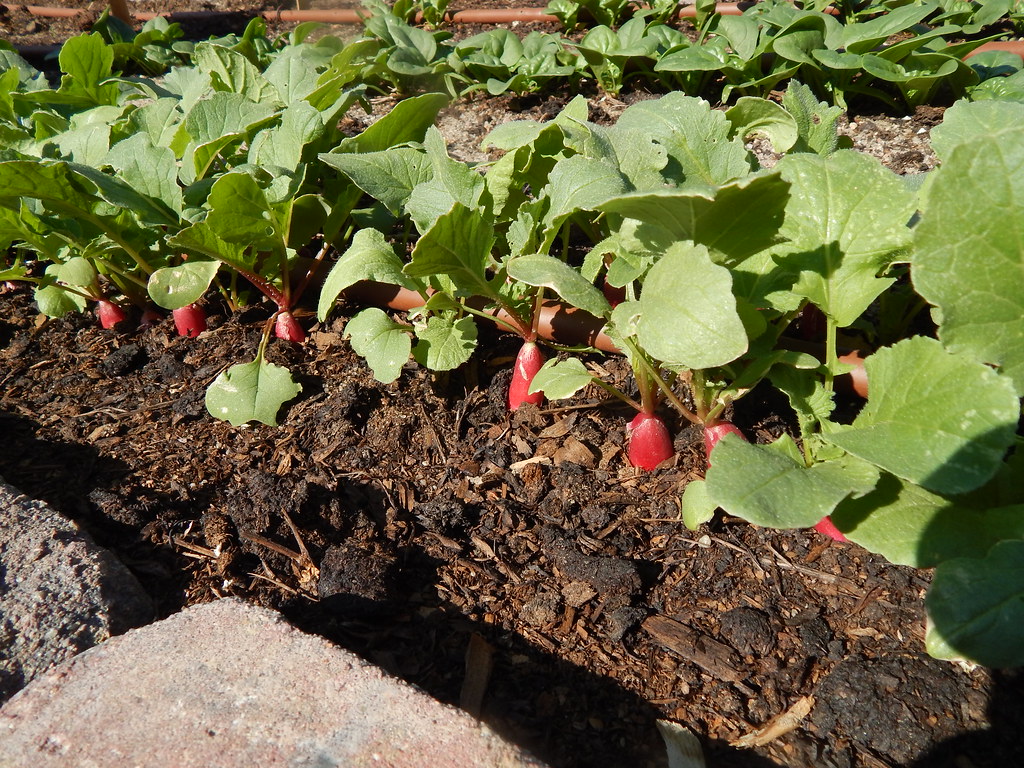 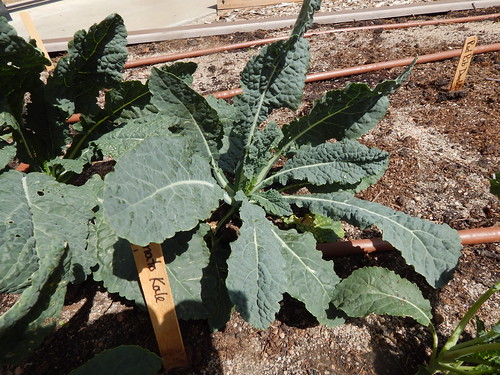 We’re going to get started with Friday PhotoEssays again, although I can’t promise you that I won’t still miss one or two until things really ramp up this spring. (If we were farther north, I would have to insert some joke about ramps. Here in Kansas, ramps…not really a thing. More about ramps.) 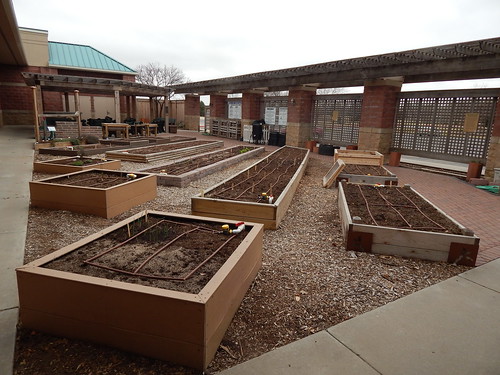 I really enjoyed doing the “Whole Garden” shots last year as a way to watch the garden grow. Right now you can see little flashes of green here and there, but mostly it is soil, drip lines, and stakes marking where we’ve planted. Let’s get closer to see what’s growing! 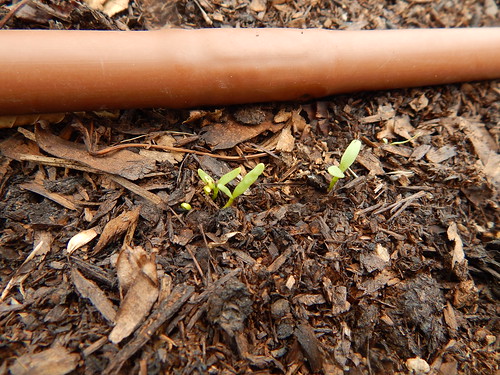 The ‘Bloomsdale’ spinach in the MG Faves garden came up last week, and I had almost completely given up on the ‘Sagar’ spinach in the Taste of India garden. I thought that either the compost was too “hot” and burned the seeds or we had let them get too dry. Then, on Tuesday, I noticed that there were a few seedlings just popping up. Now there are more. They are still much smaller than the ‘Bloomsdale.’ And here I didn’t think that growing an Indian spinach variety would be that different! 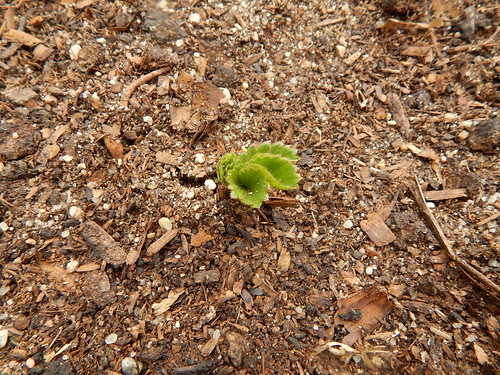 The strawberries we planted last Friday are already starting to put on a few new leaves. They don’t seem to mind the cold! 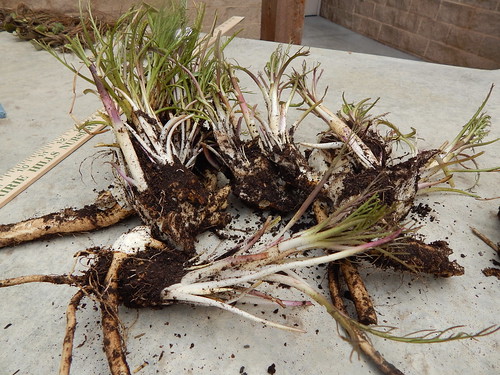 When we were working on Tuesday, I asked our MG Herb Guru about the horseradish, because I was pretty sure that now is when you typically harvest roots and then replant for spring. Our plant is one year old, so we weren’t expecting much. But, come to find out there were roots all the way through the 4×4 bed. These are all the little plants that we divided out after digging up roots. 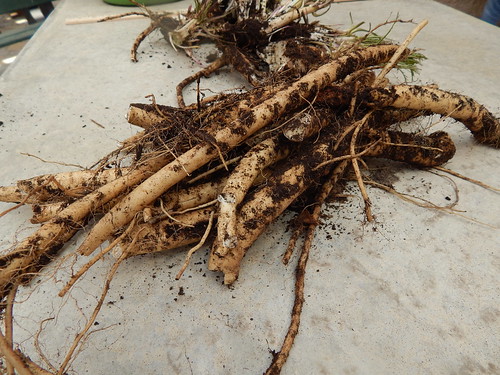 Here’s the stack of roots we harvested. They aren’t as big or as fork-y as you sometimes envision, but for a first year, they look pretty good! I guess that counts as our first harvest for this year.

Here we are on what is purported to be the last hot/warm day of the year, with a precipitous temperature drop coming this afternoon/evening as the front moves through. I’m ready for fall! I know that some people are even ready for a hard freeze to kill off some of their tomato vines.

There were some big changes in the Demo Garden this week. Can you tell? All the vines are gone from the vertical garden area as are all of the eggplant. I think we are probably going to pull out the tomatoes next week. No, they won’t be completely done and dead, but most of the tomatoes will be harvested and the remaining green ones probably won’t ripen quickly. Of course, all the things in the two fall garden beds are looking great and will probably appreciate the cooler weather!

The Swiss Chard and Arugula in the Pizza Garden are ready to start harvesting…I guess we’ll have to get on that and make some fancy pizza, huh?

In the category of “what a difference a month makes,” the spinach that we replanted a couple weeks ago is growing well, next to the sole plant that survived from the August planting.

Some of the root vegetables are starting to size up nicely. This is one of the Scarlet Red Stems turnips. You can see that some of the surrounding plants are still small, but this one looks nice. There are several that have started getting close to harvest size.

The ‘Nero Tondo’ radishes are also developing some nice roots. These still have a ways to go as far as reaching full size (think baseball sized), but it’s nice to see that they are starting to size up. It just occurred to me that some people might find the rather scaly-looking, grey-black skin off-putting. I wonder what it says about me that I just think it is cool and not the least bit distasteful? (It probably also helps that I’ve eaten them before.)

Ah, my friends the Watermelon Radishes. I’ll admit, this one is looking a bit like a purple top turnip at the moment. I’m sure it will turn out to be a nice pink radish though. I think the ones with pinker outer skins often have better interior color.

The ‘Rattail’ Radishes are getting some nice roots on them, but no “rattails” yet. I realized a couple days ago that planting a cool season vegetable that you harvest the seed pods from was probably not the right choice for a fall garden. I’ll be surprised if these actually develop the edible seed pods at this time of year, unless we get a hot week after a couple weeks of cold. (I’m thinking that’s not likely, but I guess I could be wrong.)

2.  In a food processor, blend the spinach,
basil and garlic.  Gradually mix in the olive
oil and Parmesan cheese.  Process until smooth.
Salt and pepper to taste.

3.  Blend cream cheese and feta cheese in a
medium bowl.

4.  Line a separate medium bowl with plastic wrap.  Spread 1/2 the cream cheese
mixture in the bowl.  Top with sun-dried tomato paste and spinach mixture.
Cover with remaining cream cheese mixture.  Pat together, cover and chill in
the refrigerator at least 1 hour before serving.  Flip out of the plastic lined bowl
onto a medium serving dish to serve.  Refrigerate leftovers immediately.

Serve this yummy, zingy dip with crackers or bread at your next party.  It’s best when chilled overnight before serving.