We may be on an every other week schedule for Friday PhotoEssays for the rest of the month. Next week looks pretty crazy, and then we’re doing garden cleanup the following week. 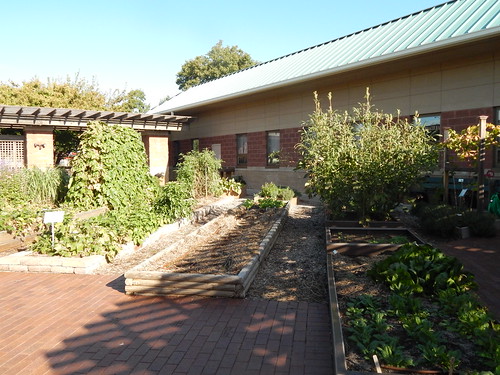 Other than the shade covering half the garden, there aren’t a lot of visible changes without closer inspection. Some of the warm season plants that are still in the garden have gotten a little zapped with the colder nights. 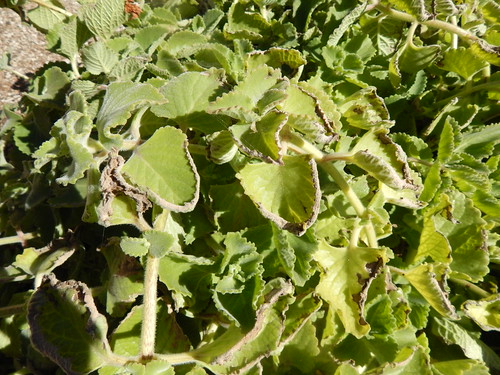 Case in point: the Cuban Oregano (or Ajwain, since it’s in the Taste of India Garden), has clearly experienced some cold injury with the browning and curling of the leaf edges. 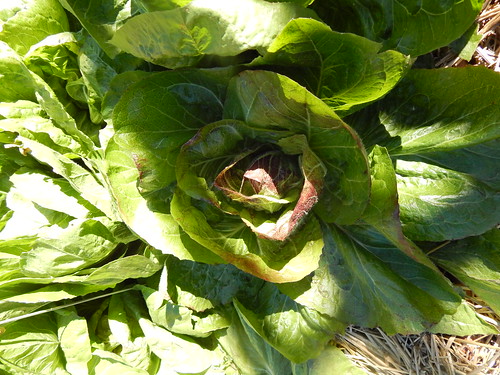 In contrast, the radicchio is finally starting to show some nice red color! Most of the plants are also forming heads slowly, although they aren’t yet very solid. 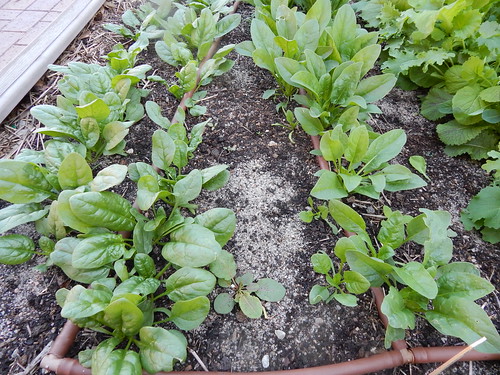 There are two different types of spinach here. The one on the left is ‘Donkey’ and the one on the right is ‘Giant Winter.’ We usually just pick a variety and plant it, so it is kind of fun to have two different types right next to each other. The Donkey variety is a little slower growing, has more rounded leaves, and the leaves are partially savoy (crinkled). The Giant Winter has larger leaves, seemed to grow faster, has longer stems, and has smooth leaves. Taste? Pretty similar, at least right now. 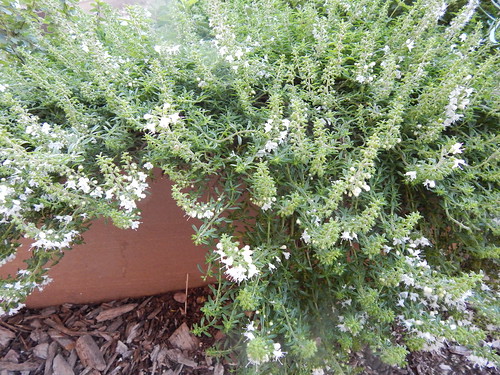 Next year the Herb of the Year is Savory, so we wanted to get a head start by planting some of the perennial savories in the garden this year. The summer and winter savories both died, but the Creeping Savory has taken off! It is blooming now, and looks great! 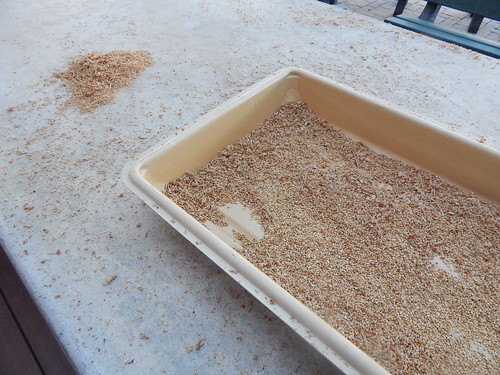 We did strip some of the quinoa seeds off the stalks, and tried out the “blow dryer” method of separating the seeds from the chaff. It actually worked pretty well! It isn’t perfectly clean, but it’s a start.

I don’t know about you, but I’m ready for fall! I was so ready that I took the loppers to all the tomato plants in my home garden last weekend. Most of them are still growing here in the Demo Garden though. 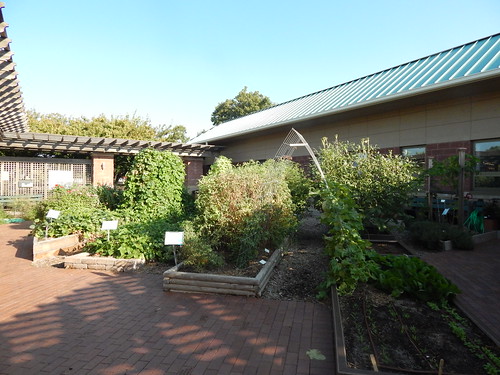 The sun angle makes everything a little tricky this morning, but you can probably see that the quinoa is gone and that some of our fall seedlings are showing up better. 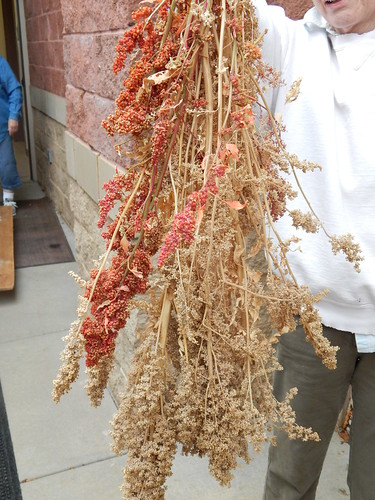 The quinoa never got quite as colorful as we hoped it would, possibly because of the storm that knocked a lot of it over. In this bundle you can see a few nicely colored heads. Since the stems were brown, we cut the heads a few inches below the seeds, and they were hung to dry for a week or so in our shed. They are supposed to be dry and crumbly when they are ready to clean. 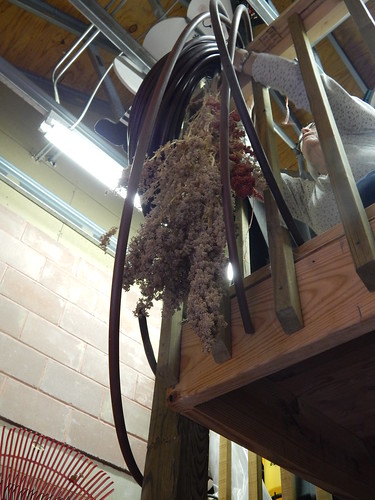 We ended up hanging the bundles off the top railing of the stairs, so they wouldn’t accidentally get hit while getting things out of the shed. Our shed is unheated and unairconditioned, but fairly dry, so it is usually a good place to hang things like this. 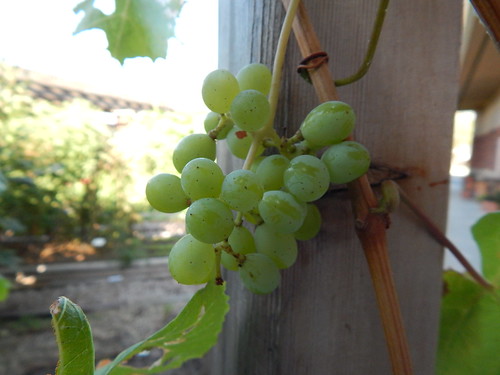 Even though our ‘Himrod’ grape vine is brand new this year, we still have a couple small clusters of grapes on it. Yes, we probably should have cut them off, but they were so small that it didn’t seem worth it. 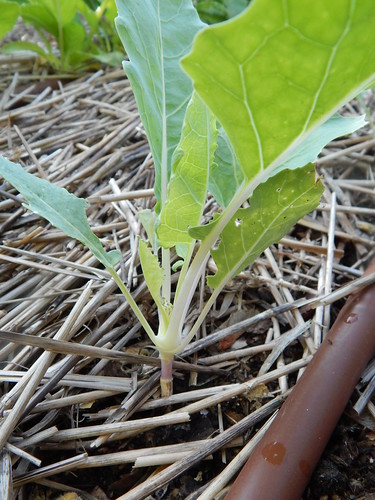 The kohlrabi that we planted is just barely starting to form the bulb at the base, if you look really closely. I suppose if you’ve never seen kohlrabi grow before, that might be tricky. You’ll have to stay tuned as it gets bigger! 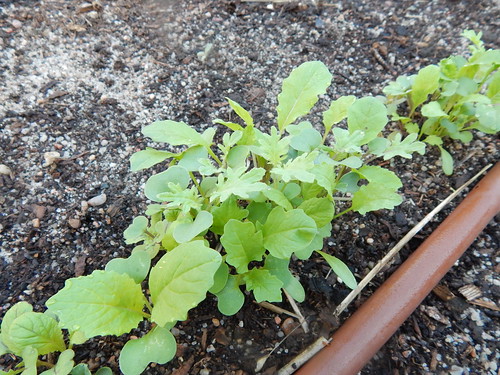 Hurray for salad mix! Most of the seeds we planted a couple weeks ago are up and growing. We should have lots of greens and radishes in a few more weeks.

It’s Friday! And you can tell that the garden is continuing to wind down into fall. I will have to look back and see at what point the garden stops getting greener and starts getting browner. We are definitely into the “browner” stage right now. 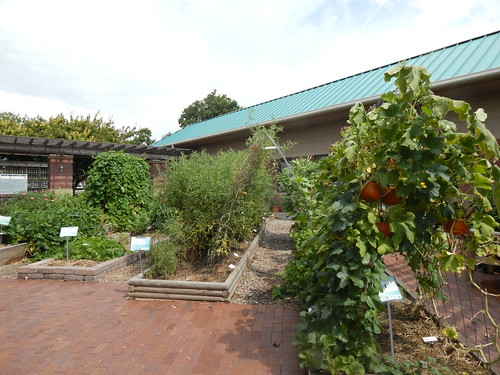 I guess it’s still pretty green though, at least from a distance. It helps that you can’t really see the quinoa from this angle. 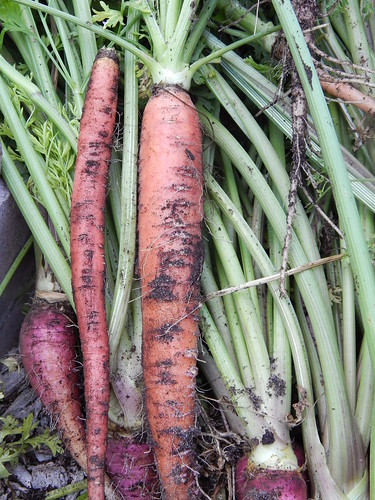 We did harvest the ‘Kesar’ and ‘Red Samurai’ carrots from the India Garden this week. They were pretty good sized! Unfortunately, they had just enough exposure to heat this summer to make them pretty bitter. Ideally we would have harvested them earlier, but since they got started late, they really weren’t ready. Honestly, they were pretty yucky. 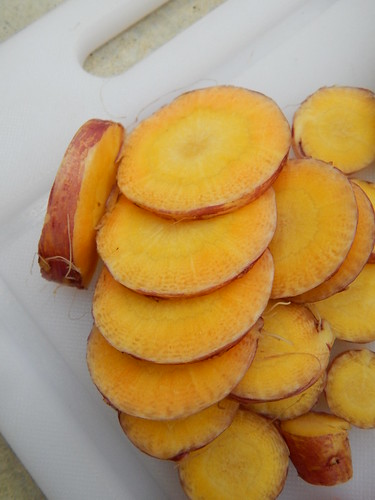 So the ‘Kesar’ carrots, which were billed as “red” were actually purple skins with yellow interiors. I guess that is yet another lesson to take catalogue descriptions with a grain of salt. 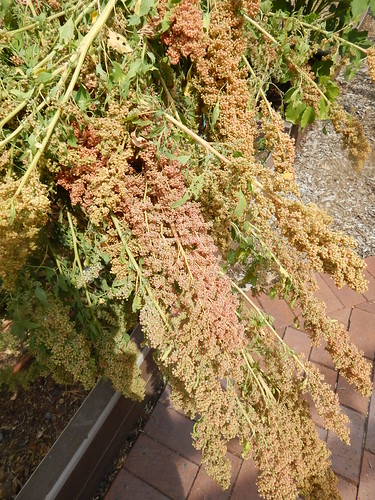 The quinoa is still flopped over from the wind and storms last week, and it continues to develop some more color! I hope the color keeps getting brighter, otherwise I’m going to be sad. 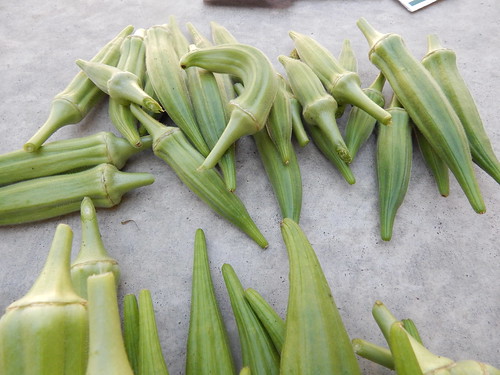 We also went through and harvested all the okra that was ready (and past ready). Most okra starts to get tough and stringy once it is more than 3-4″ long, so it is important to pick it as it reaches the right size. I read a blog post this week called “A Reason to Love Okra” which talks about how okra is cooked in India. I thought it was a really interesting insight into the different preparations of okra that we use.

Speaking of which…tomorrow at 9 a.m. in the Demo Garden is our August Saturday Sampler program, and we are featuring Indian recipes and recipes with flavors of India. I know one of the recipes in the booklet is a Crispy Okra Raita, but I don’t know if that one will be up for sampling or not. Either way, you should come check it out!

It rained again! Quite a bit actually. The rain gauge in the garden only measured about 2″, but I hadn’t realized that the Cuban Oregano had kind of grown over it. So…we’re just guessing. Then again, we’re not that far from the airport that recorded less than an inch. My neighbor recorded 3.5 inches. (My rain gauge at home is laying on its side…not very effective for measuring the rain.) 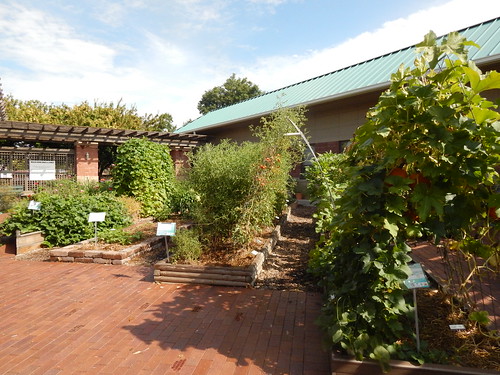 Here’s the whole garden picture from this morning. I feel like we are in a “maximum garden growth” stage with not much visible change at this point. Well…until you get closer, that is. 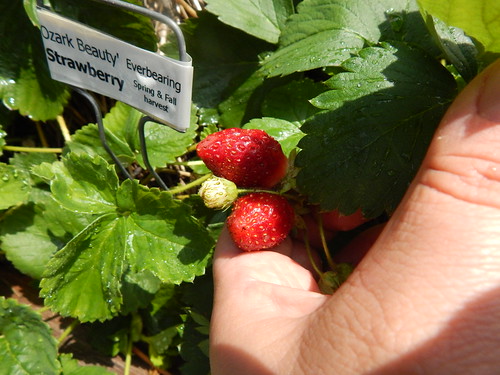 There are a couple small berries on the ‘Ozark Beauty’ plants. They both had a couple of small bug bites, so I picked them off and sampled the other side of the fruit. My opinion? They were soft, which is understandable given the rain, but still too soft. It is usually considered “okay” for a fruit grown in a home garden to be softer, but I think these would have been mush by the time you picked a bowl full and took them inside. Assuming you could get a bowl full. They are small, which is also annoying. What would make up for these factors? Great flavor. Well…in this case the flavor was okay, but mostly just sweet with no depth. Again, partially explained by the rain, but still… This is a variety that you can find at lots of box stores in the spring and is touted as one of the best “everbearing” strawberries for home gardeners.

Okay, because I can, I’m going to compare these to another variety (not in the Demo Garden) just to show the difference. 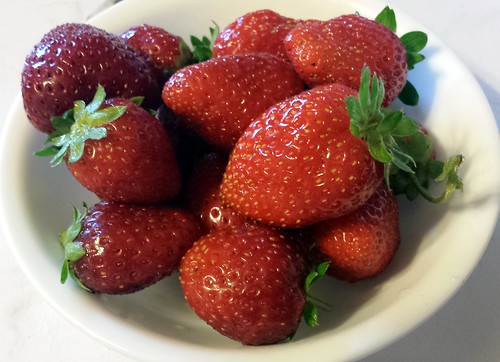 These strawberries are a variety called ‘Albion,’ which is one of the day neutrals we considered planting in this garden. Instead we chose ‘San Andreas’ which was supposed to be better than this variety. Unfortunately, it didn’t make it, we suspect due to residual herbicide issues. I have been getting a solid handful of berries from my plants (and a friend with the same plants has too). The berries are consistently medium to large sized, firm but not too firm, and have GREAT flavor.  This is a variety that is a commercial variety for market growers. Maybe I’m missing something, but why wouldn’t this variety be better in your home garden too? Why as a home gardener should you be given the “best” choice of something that is clearly sub-par rather than a great variety like this one? 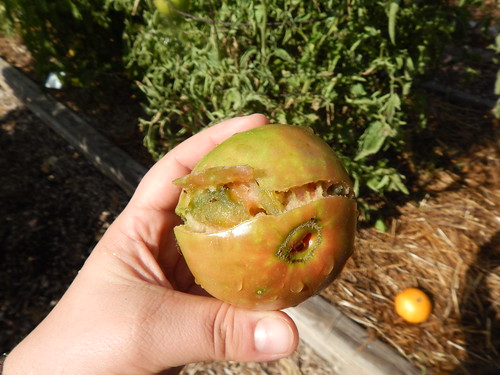 This is yet another case in point of why it is a good idea to pick your heirloom tomatoes early, when they just start to turn, rather than wait until they are fully ripe. This horrendous crack is due entirely to the rain we got. 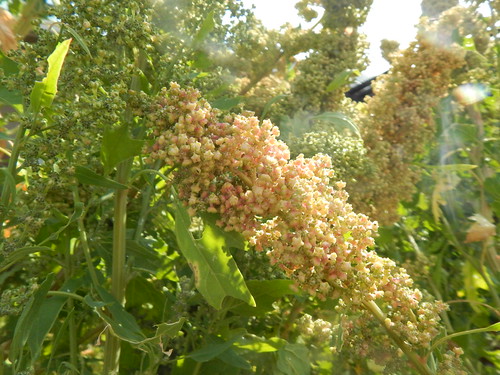 Do you see it? Do you see the tinge of pink showing up on this head of quinoa? Am I way to excited/anxious about this quinoa getting to the colorful stage? Yes, probably just a bit. If you think I may be more excited about the colors than actually harvesting the quinoa, you may be right. 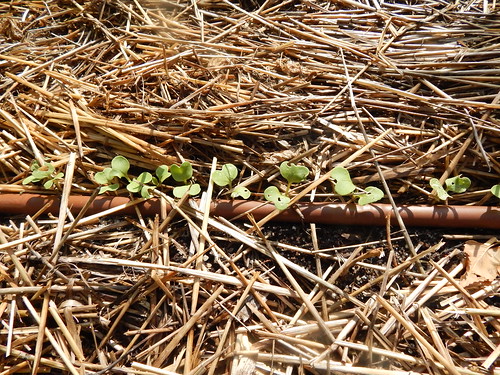 We have some radish seedlings! These are the Watermelon Radishes which seem to get planted at least every other year in the garden. These are in the MG Faves garden, so we will be looking for some colorful radishes later this fall. 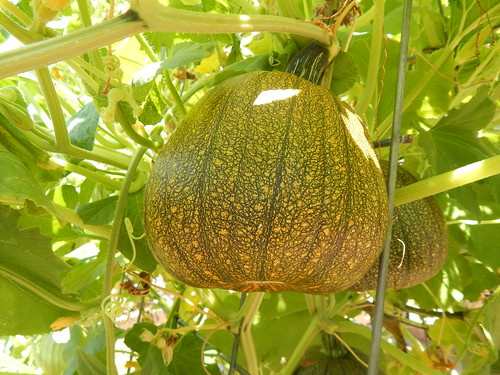 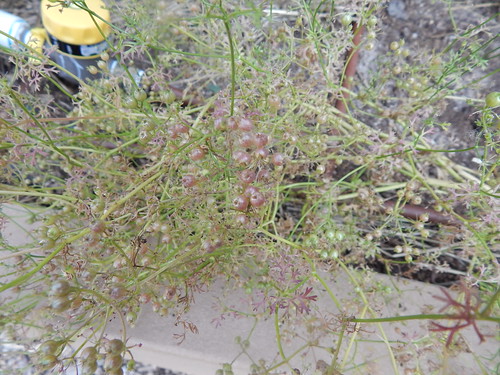 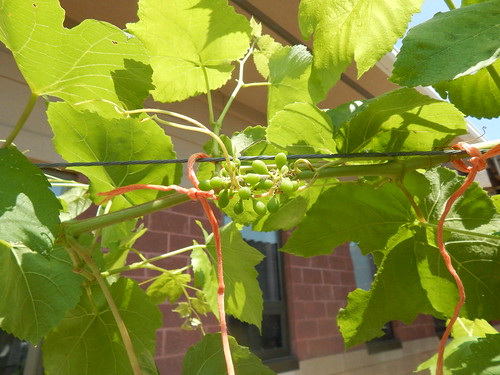 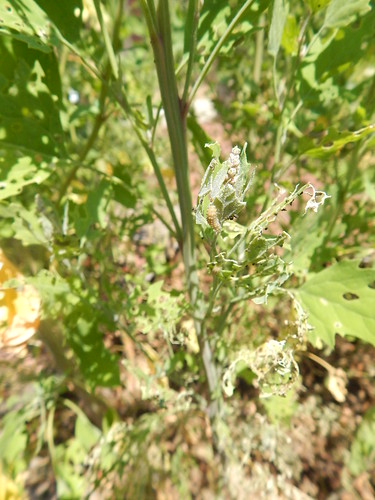 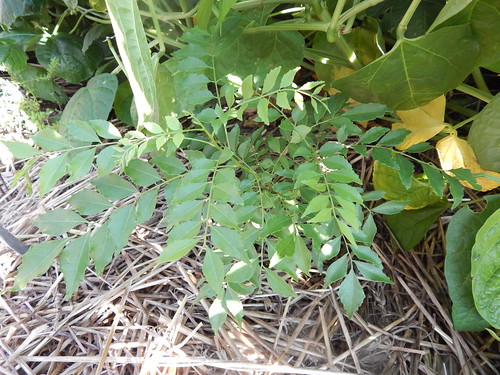