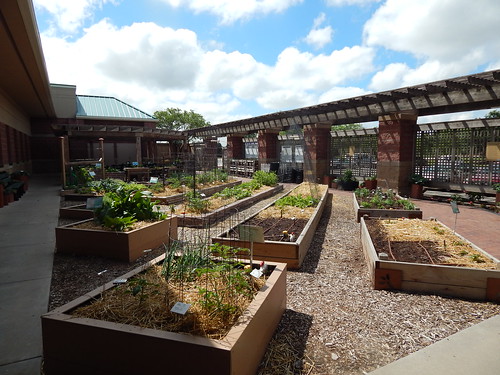 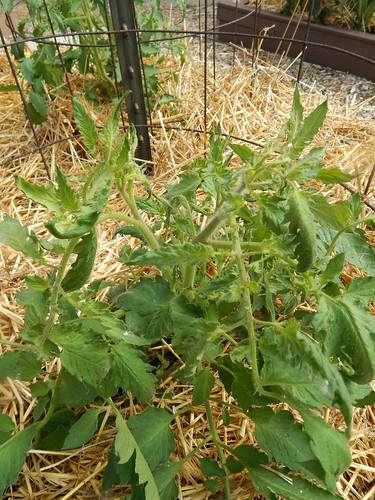 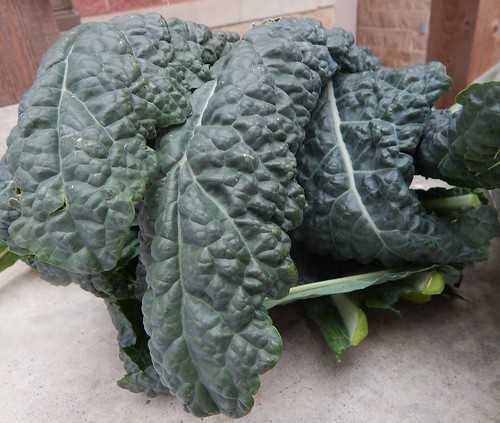 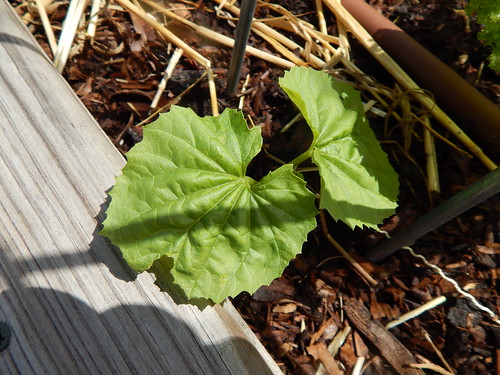 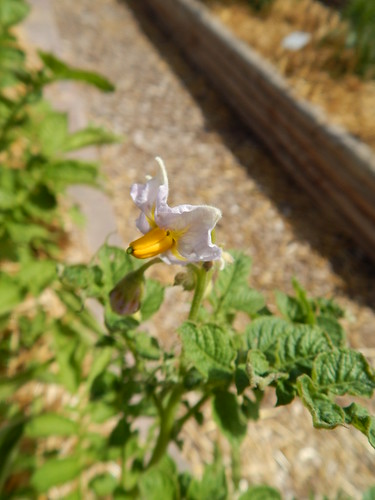 Have you survived the first bout of heat this week? It is definitely a change for this year!

Here’s the view of the whole garden for the week. I took the picture Thursday afternoon, hence the full sun! Plants are getting bigger, especially the tomatoes, which seem to have doubled in size over the week. You can also see that the garlic and shallots are getting progressively more grey in color as they get closer to harvest. I am still taking the “whole garden” pictures from the other angles too, I just don’t want to spend the space looking at them here. I created a set on Flickr for them, and I’ll get them all added to the set eventually. That set is here.

Our sweet potato slips are here! I’ll have more about those next week, so stay tuned!

This Red Large Lettuce Leaf Basil is living up to its name in that it is purple/red and the leaves are getting huge. Whether it looks like lettuce leaves I will leave up to you. It does have a very funky appearance though, especially compared to your typical basils.

I cooked up something tasty this week using garlic scapes, fresh Maiskij garlic, shallot scapes, and some of the lemongrass I froze last fall. You’ll have to check back next week to see what I made! (Sorry, I know…so many future blog posts, so little time this week.)

As per usual, a couple weeks after putting out the wheat straw mulch, we have wheat seedlings growing! This really isn’t a big concern. It is easy to pull out and either let it dry on top of the mulch or add it to your compost bins. If you are more on top of things than we are, you would have watered your straw bale a couple weeks before mulching, let it sprout, then spread the mulch afterwards.

These are the tomatoes from the ‘Taxi’ plant. They sized up quickly over the weekend, although they still aren’t at full size. Unless one of the grape or cherry tomatoes comes on strong (a real possibility), my money is on this plant for having the first ripe tomato of the year.

After the three day weekend, you might expect we would have lots of projects around the garden. Not necessarily the case! We really had only one larger project to complete, since everything is planted and we aren’t ready to start harvesting anything. That big project was spreading mulch.

We had some really nice wheat straw to use. It makes the plants look even greener! We try to put about 3 inches of straw around most of our plants. We mulched the tomatoes, peppers, and eggplant today.

Here’s the mulched Pizza Garden. The garlic and shallots still have a little bit of straw left from last fall, so there was no reason to try to replenish their mulch. Things like beans and herbs we didn’t mulch, although we probably could have. The basil we left unmulched because it is still pretty small and it could use some more heat in the soil.

One of the effects of using straw mulch (or any organic material like leaves or paper) is that it cools the soil a few degrees. You don’t want to put straw mulch down too early, before the soil is nice and warm. We also left the vine crops unmulched for the time being, although we’ll put straw down in the vertical garden in a few more weeks. (On the other hand, that cooling effect will come in handy in a few weeks!)

The three biggest benefits of mulching are:

So go out and find yourself some mulch (if you haven’t already)!

Hopefully this is the first of a full season of Friday PhotoEssays! There’s just a few things up right now, but the garden is going to start changing quickly.

I don’t know why, but I’m loving watching the shallots grow. Maybe it’s because I know there was only one bulb planted in each spot originally, and there is now a clump of stems coming up from each spot. I love watching the multiplication! So much more fun than regular onions, or even garlic.

Speaking of garlic, this is the ‘Maiskij’ variety. It is huge already! Those stems are about the same diameter as a quarter! This variety is either going to be VERY early maturing or the bulbs will be huge by late June.

To put it in context, the variety in the background is ‘Maiskij’ (no, I have no idea how to pronounce it), and the one in the front is ‘Siberian.’ It is healthy, but not nearly as big as ‘Maiskij.’ There are some varieties that are currently even smaller than ‘Siberian.’

This radicchio is unfurling a little bit in the warmth and sun from earlier this week. I’m not quite sure what it’s doing, but I’m afraid it is going to bolt. I noticed today that it was curled back up a little more, so we’ll have to keep an eye on it.

Yes, it’s a handful of dirt. No, make that soil, folks. One more picture, and then I’ll explain.

Yes, I know. Another handful. Can you tell which handful of soil is moist and which one is dry? Maybe? It’s a little hard with our current soil to get a really good differentiation in the pictures, but the first picture is moist and the second is quite dry. I was wracking my brain trying to figure out how to take pictures of differences in soil moisture and temperature (because, you know, warm soil looks so much different than cold?!?). I finally decided just to take a couple pictures and explain.

Because we’ve had (and still have) straw mulch over a good portion of the garden this winter, you can really tell the difference it makes in both soil temperature and moisture. The mulched areas have nicely moist soil, while the bare areas are dry. However, the mulched areas are much cooler. You can easily distinguish the difference in soil temperature by touch, because the mulched areas feel almost cold to the touch, especially after you have touched the unmulched soil. There are definitely some pros and cons to mulching through the winter!

Have a great week!

Today was “Mulch Day” in more ways than one. We put fresh wood chip mulch down on the paths, which was much needed. We had some holes that were definitely taking on water every time it rained. The mulch should help keep the mud down in the garden.

We also put straw mulch down around our tomatoes, peppers, and eggplant.

We used about a bale and a half of wheat straw mulch, so yes, we will have some wheat growing out of the straw later on. But the mulch does so many good things for us, that it is worth it.

Good reasons to use mulch: