Since we are basically done with Friday PhotoEssays for the year, I am going to switch gears a little bit and do a few more “Year in Review” posts to wrap up this year’s garden. We’ve already done the heirloom tomatoes, and today we are going to take on the Taste of India garden.

Cumin: We never managed to get the seeds to germinate. I don’t know if it was them or us, but we’ll have to give in a try another time. 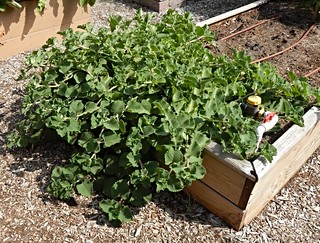 Ajwain/Cuban Oregano: This plant started as a tiny transplant that I thought for sure was going to bite the dust. And then it turned into this sprawling monster! Needless to say, it loved the summer. It did start showing cold injury once we got down to the 40s overnight. Unfortunately, I never got around to figuring out how to cook with it, so it was an attractive plant, but not overly useful.

‘Kesar’ Red Carrots: These carrots had huge tops, and the roots were decent sized as well. They were more purple than red, although a commenter did say that the name of the carrot indicated the more purple color than what we would typically call red. Unfortunately, we got a late start with them, since the seeds didn’t germinate readily. (Again, probably more us than them.) This meant that by the time we harvested, the carrots were pretty bitter due to the heat.

‘Dulhan’ Pepper: This was a round, flat pepper that started pale cream/white and turned red. It was a sweet pepper with a little kick to it. It did fine, although by later in the summer it was getting too much shade from the trellises and didn’t produce very well. 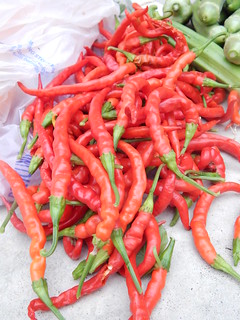 ‘Jwala’ Pepper: This hot pepper did great, as most hot peppers are prone to do in Kansas summers.

‘Sagar’ Spinach: This spinach was a little bit slower to germinate than our regular spinach varieties, and the leaves were much more tender and succulent. I think that flavor-wise it was a little stronger flavored. Maybe a little more reminiscent of mustard or kale? It was no more heat/bolt resistant than other varieties, which I was hoping for. I’m curious to see how it compares to the other spinach when it gets cold next week, but I’m not expecting it to survive like our other spinaches. 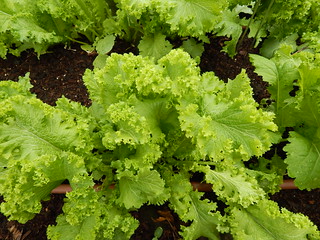 ‘Basanti’ Mustard Greens: If you like mustard greens, this was a great, fast-growing variety. We had a hard time keeping up with it in the spring. It did bolt earlier than I thought it might, but we were really tired of mustard greens by then.

‘King Cobra’ Snake Gourd: The snake gourd plant was slower to get started in the summer, but it pretty much took over the world after that. It had really cool white flowers with nice fragrance. The plant itself was relatively productive, although we weren’t harvesting frequently to help keep it producing. We never got around to trying out recipes with these gourds, so it was more ornamental than anything.

‘Tagore’ Bitter Melon: The bitter melon plant did well initially, until it got swarmed under by the snake gourd. We did get some fruit off it earlier in the season, but then it quite producing. My best guess would be that was due to the snake gourd. Or maybe it just isn’t that productive. Denise did cook a couple of these, but we decided that it was a big hassle to cook with and that zucchini were tastier than the bitter melon. 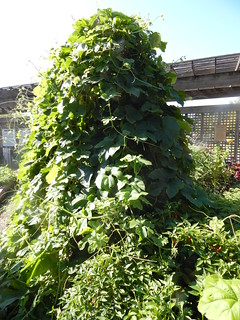 Snake Gourd vs. The Garden

‘Poona Kheera’ Cucumber: This cucumber was quite productive in the first part of the summer and had decent flavor. It was pretty seedy, but that would be normal for this type of cucumber. Again, not much production later on, which I blame on the snake gourd.

‘Sambar’ Cucumber: Since this was the cooking cucumber that was harvested at the yellow stage rather than the green stage, the plants definitely didn’t produce as much as other cucumbers. Leaving maturing fruit on the vine usually limits additional fruit development. We got a decent harvest, but not spectacular. And they seemed to quit producing in the late summer. Dare I blame the snake gourd again?

‘Black Kabouli’ Chickpeas: The plants were attractive and the yield was okay, all things considered. We did have some caterpillar eating the peas out of the pods, which reduced the yield. Fun novelty, but not particularly productive for a small space. I still need to make up a batch of hummus from the chickpeas we harvested.

Green Cowpeas: The cowpeas went crazy over the summer. We ended up cutting them back several times. They also completely swarmed under the Curry Leaf and the Lemon Savory that were growing on the end of the bed. The yield was decent, although for the size of the plants I would have expected a little bit more. They had a couple different flushes of flowers and pods, but then quit as it got cooler in the late summer and early fall. Probably more effective as a cover crop than a yielding crop in a garden, but still fun to try.

So….this garden was a bit of a story of a couple plants taking over everything else and a few other plants that did well. Nothing particularly stood out as something that we need to try again or that we really liked.

I told you it got crazier, didn’t I? That said, I’m really excited about this garden! I love trying new things, and although they could totally flop, it is what keeps the garden exciting.

One of the best things about planning for this garden is that I really wanted us to use Indian varieties, not just vegetables that are used in Indian cooking. It’s one thing to say, “They eat cucumbers in India, so let’s just plant any old cucumber variety.” It’s something different to plant a variety from India. So, when I started researching before our committee meeting, I was ecstatic to find a seed company selling Indian varieties in the U.S. – Seeds of India! The vast majority of our plants and seeds will come from them.

Before we discuss the specific things we decided to plant, I thought it might be helpful for you to see a list of the vegetables, herbs, and spices that were under consideration:

You can see how it might be possible to have an “Indian” garden that didn’t seem very Indian at all, if we weren’t careful. This is by no means a comprehensive list – there are a number of other things that I didn’t include on the list, in some cases because I wasn’t sure what they were or where to find the seeds. Here’s a good guide to Indian vegetables.

So, the things we did choose to plant:

Curry Leaf – this is a tropical plant (can’t handle temps below 55!). It is almost like the bay leaf of Indian cuisine. A lot of traditional curry recipes call for curry leaf, so I’m excited to try growing it as an annual.

Cumin – This plant grows a lot like dill, with the umbels of flowers (pink!) that then produce seeds.

‘Kesar’ Carrot – This carrot is red, high in lycopene, and the Days to Maturity was listed at 120 days. We decided to plant some of the ‘Samurai Red’ carrots (60 days) as well, just in case the ‘Kesar’ variety doesn’t make it through the hot summer. We may plant a second crop of carrots in the fall.

‘Dulhan’ pepper is shaped like a tomato and is supposed to taste like a sweet pepper but with a hint of heat.

‘Jwala’ is a hot pepper that is reputed to be the most popular hot pepper in India. It looks a lot like a cayenne pepper to me, but it’s hard to tell until you can compare side by side.

On the first trellis we will have edible gourds – one snake gourd and one bitter gourd (aka bitter melon).

‘King Cobra’ snake gourd is supposed to have long, white speckled fruit that look like snakes. The gourd is low in calories and can be cooked in a variety of ways.

‘Tagore’ bitter gourd (or bitter melon) is an Indian-type  gourd with a mild bitter flavor and more rounded tubercles, compared to some of the more pointed types.

For the cucumbers, we chose ‘Poona Kheera’ (aka Puneri) and ‘Sambar.’ Poona Kheera is a salad cucumber that is white when young and turns russetty brown as it gets bigger. It is supposed to thrive in hot, arid climates. (Watch us be cool and wet this year!) ‘Sambar’ is listed as a cooking type cucumber for use in curries and stews. It is yellow with brown blotches on the skin.

Legumes are a staple of Indian food, and so we wanted to try growing some, even though we don’t have enough space to get a great yield. The ‘Black Kabouli’ chickpeas have black/dark purple seed coats, rather than the typical brown. Black hummus, anyone? Chickpeas typically like slightly cooler summers, so I don’t know how well they will do here. Cowpeas are a traditional Southern vegetable, although the Green cowpeas are an Indian variety. Cowpeas typically do fine here.

All told, this garden could be spectacular and exciting or a source of a lot of stress this summer!