It’s hard to believe that it is somehow September. I associate September with fall, and the nights are certainly getting cooler, but the garden still looks like a summer jungle.

I both really enjoy this garden season – when everything is still mostly lush and overgrown – and get really annoyed by it! Primarily I get annoyed when I have to try to get from one end of the garden to the other, as many of the paths are encroached upon by plants that have gotten floppy.

Speaking of floppy, lush, and overgrown, the ‘Esterina’ cherry tomato continues to impress. It had a couple weeks of slower production (probably coinciding with earlier hot temps), but has bounced back with a vengeance. The plants themselves are not overly attractive anymore, but who cares when you have this many scrumptious tomatoes to eat?!?

In the “overgrown” category, we found this bean hiding amongst all the leaves and vines on the trellises in the Oriental Garden. It is one of our Winged Beans that we gave up on months ago and planted the Chinese Long Beans. Apparently at least one of the plants survived and has finally started producing a few pods. If you think it looks like a green bean or pea pod with green feathers sticking out the corners, you would be right.

Yet another case of both lush and overgrown, the purple pole beans on the trellis in the purple garden are quite jungle-ish and have finally starting producing in the last week.

There was a point earlier in the season where I didn’t think the hops were going to reach their full potential this year. Clearly I was wrong on that count! In the past few weeks they went from barely covering the tomato cage to having grown all the way up, and then back down.

With so many peppers in the garden this year, I sometimes feel like I’m doing Friday Pepper-Essays. Just one pepper picture this week! This is the Tabasco pepper plant. The peppers start green, fade to pale green, then turn orange, then red. I’ve started looking up homemade hot sauce recipes!

The final two raised beds are both 4’x4′ square beds. 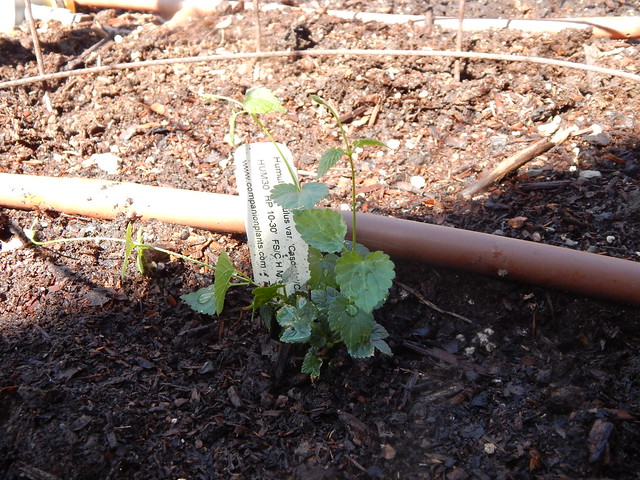 In Bed 9, we are planting a ‘Cascade’ Hops vine to grow for the next few years. Hops are used for brewing beer, and we have been getting more and more questions about growing them. The young shoots of the vine can also be harvested like asparagus and eaten. The vine can grow 10+ feet per year. It is also a good food source for butterflies. We ended up planting some caraway seeds around the hops vine as well, just to fill the space until it grows.

Bed 10 is not yet planted, since the weather isn’t quite warm enough yet. This bed will feature plants from the Ginger family (Zingiberaceae).

Ginger used fresh is becoming more familiar to the average American cook, but it is still uncommon in the garden due to the tropical characteristics of the plant. Other flavoring or spice plants that are in the same family of tropical include cardamom, turmeric, and galangal. These plants will also have a share of this garden. It remains to be seen if they will do much, but it will be fun to watch them grow.