I think our garden is about ready for fall, as you can easily see below: 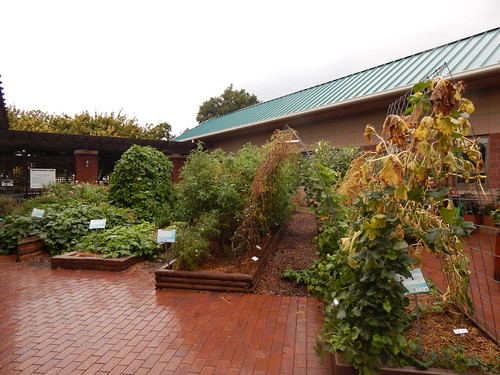 Clearly the pumpkin and the tomato on the nearest trellis have seen better days. I suspect that by next week the garden is going to look significantly different! Fall garden, here we come! 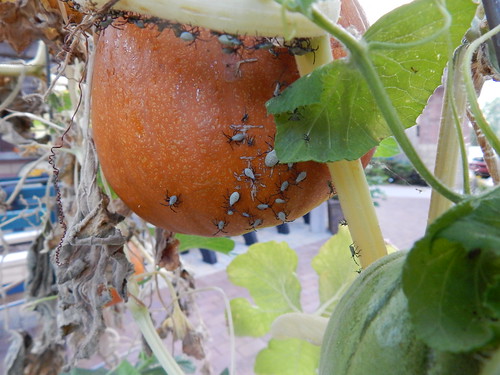 One of the reasons the pumpkins are looking so sad is because there are dozens (or more) squash bug nymphs all over them. I’m actually rather impressed that they didn’t show up before now, when the pumpkins are almost done producing. Since the plants are nearly dead and we picked all but 2 pumpkins this week, I think we will just be removing the plants rather than trying to treat for the squash bugs. 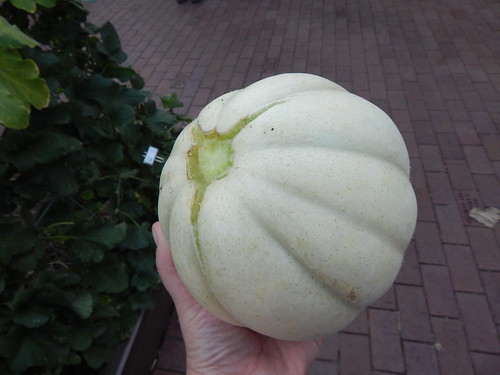 This is one of the fruit from the ‘Tondo Liscia Manduria’ cucumber vine in the Italian Garden. We let it go all the way to “melon” stage, and you can see that the stem had slipped (separated from the fruit) and it was starting to crack. 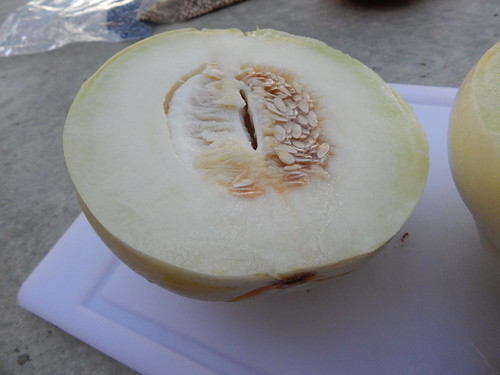 From the inside, you can see it looks quite a bit like a honeydew melon. It tasted pretty good – not dissimilar to a honeydew melon. Maybe not quite as sweet. The texture was very much like a melon. So it’s a dual purpose plant – cucumbers and melons! 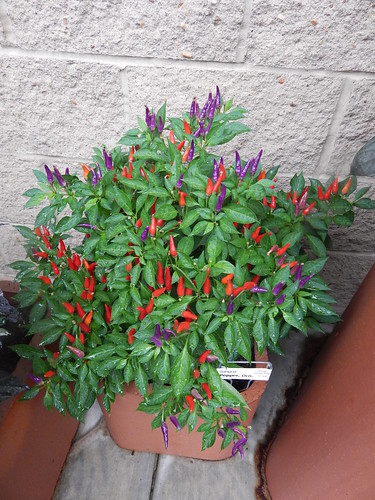 We have ornamental peppers in many of our containers this year, and they are just starting to look really spectacular. This is a variety called ‘Sangria.’ I love the mixture of red and purple peppers. 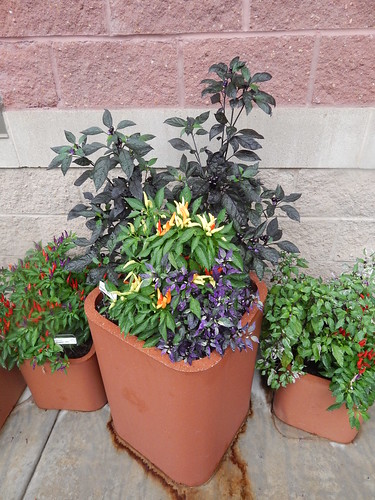 This pot has three different varieties, and the color combination is really interesting. I love the purple plant in front, then the green plant with orange fruit, then the “black” plant at the back. The sizes of the plants worked well too!

A Quick Tour of the MG Faves Garden

We haven’t done very many tours of individual garden beds this year, for some reason. I thought today seemed like a good day to take a look at the MG Faves Garden. 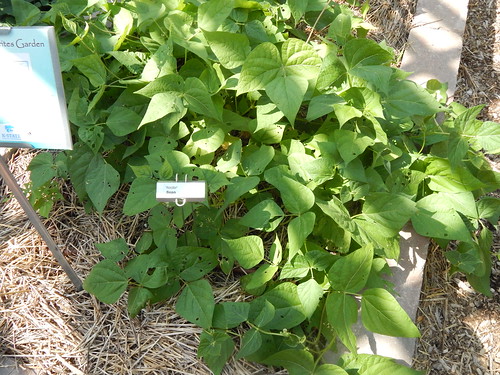 On the end of the garden, where the Yukon Gold potatoes resided earlier this year, we have a planting of ‘Rocdor’ yellow beans. They are generally looking pretty healthy and will probably start blooming in a couple weeks. Yum, fall beans! 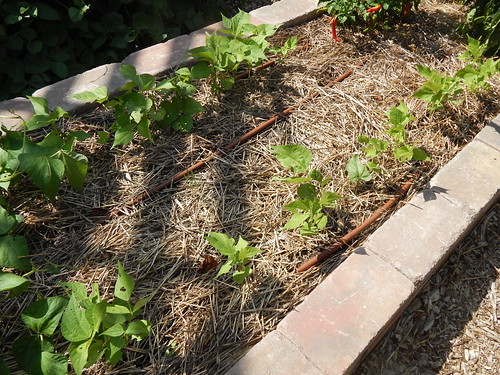 Next to the ‘Rocdor’ beans is our fall planting of ‘Beananza’ beans. These were planted a couple weeks later, so they aren’t quite as far along. We had originally planned to try to keep the spring planting all year, but the spider mites just got too bad. So with that situation, we moved the ‘Beananza’ beans to this spot, where we would have other wise planted more root vegetables. Since this is the spot we just pulled beets and carrots out of, it wouldn’t have been ideal to go back in with more root veggies anyway. 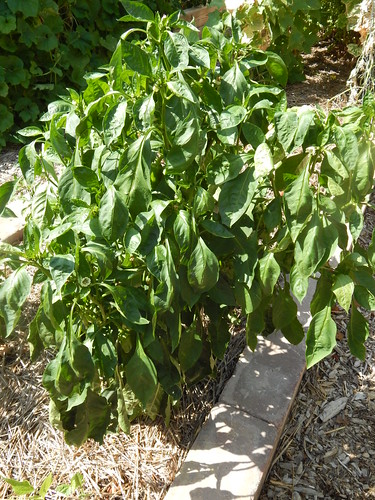 The ‘Big Bertha’ bell pepper plants are huge, but they haven’t been very productive recently. They had a few peppers early in the summer, and all the remaining peppers are still pretty small. This isn’t uncommon with peppers, but my perception is that these plants are less productive than in other years we have grown this variety. 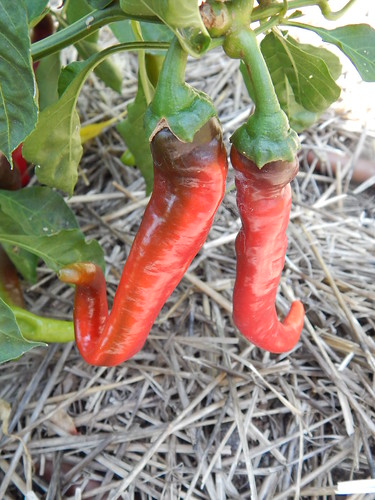 On the other side of the bed, we have two Cayenne pepper plants. They have been quite productive this summer. But then…it seems like hot peppers are always more productive than you wish they were! 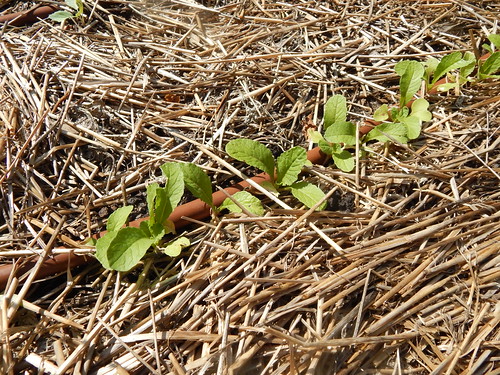 Then we have the fall vegetable section, with a row of kohrabi (not pictured), and a row of healthy Watermelon Radishes. There will also be a row of lettuce or spinach planted in a couple weeks.

I didn’t take any pictures of the cucumbers on the trellis, because there isn’t much to see. I’m not sure why, but neither the ‘Sweet Burpless’ nor the ‘Straight Eight’ have been particularly productive. It may be the shading from other plants or something, but the plants aren’t huge and while we’ve gotten several cucumbers at a time, they aren’t spectacular. They do have a fair bit of anthracnose from earlier in the summer when it was rainy and cool, but I would have expected them to grow out of it by now.

We will probably pull them out and remove the trellis in a couple weeks to plant some fall salad greens. 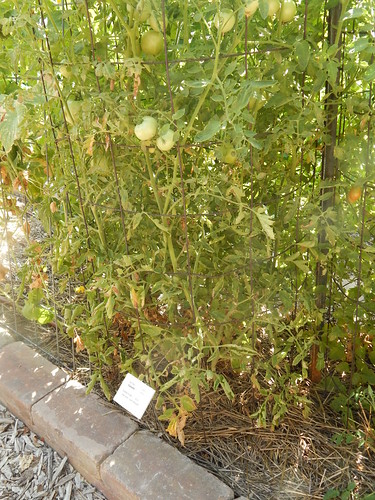 The Jet Star has been reasonably productive, but again, not as productive as I think it should have been. In thinking about it and looking at the picture, I suspect that we should have used some fertilizer in the mid-summer after the first flush of fruit set. We put so much compost in during the spring, that I didn’t really think about it. However, the garden soil is pretty sandy and with all the rain and irrigation, these plants could be nitrogen starved. They do look a little bit yellow and peaked. At this point, I think that there’s not a lot of point in fertilizing, because I don’t know that it would get us anything. We’ll think about it! 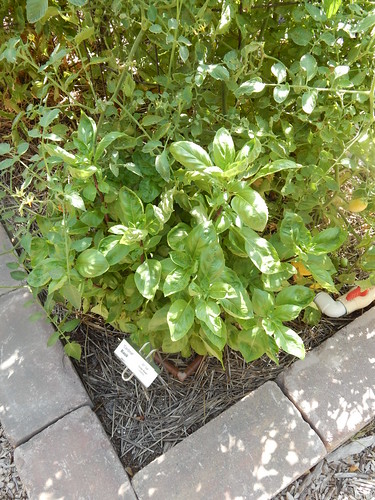 The poor Cardinal basil! When we grew it 2 years ago, the plant was huge and gorgeous and full of blooms. This year I don’t think it has even considered blooming. I think this is a case of way too much shade from the nearby tomatoes and trellises. The plant looks generally healthy, just small. We have had more problems with shading this year than the last two years, it seems. 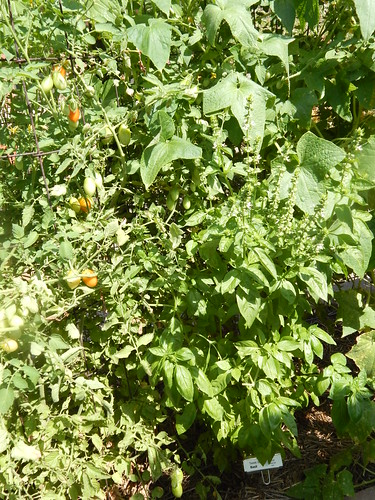 The sweet basil is sandwiched in between the Juliet tomato and the cucumber trellis. Can you see it there, stretching out? This basil also got shaded, but has just enough sun to encourage it to stretch. The ‘Juliet’ tomatoes have been fairly productive, as they do tend to be, although not quite as much as I would expect.

That’s what’s up in the MG Faves Garden! Is your garden starting to look tired too?

We had lots of things to pick today after a hot weekend! We also planted a lot of things for fall, with more to come in the upcoming weeks. 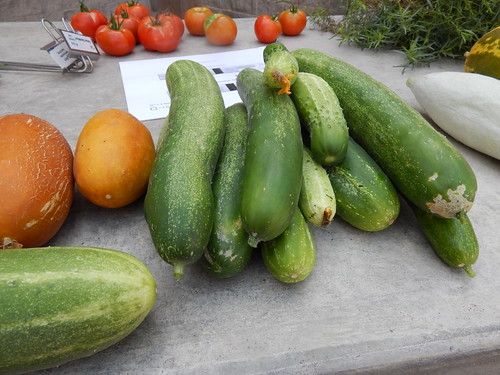 Some normal cucumbers, for a change! 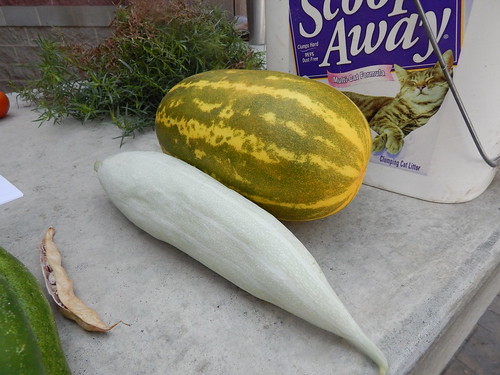 A Snake Gourde and a Sambar Cucumber from the Taste of India Garden. No, that bucket doesn’t have kitty litter in it. And in the lower left corner is a pod of the Lingua di Fuoco beans from the Italian garden that I picked to show that they aren’t quite dry yet. 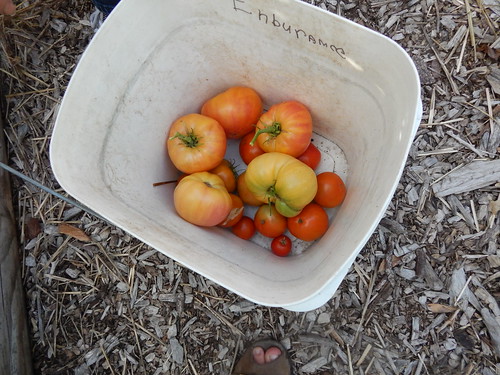 Some pretty heirloom tomatoes! Most of these are Northern Lights with a few cherry tomatoes and Silvery Fir Tree tomatoes. 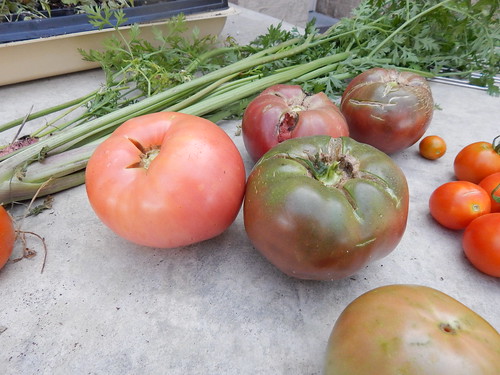 Some n0t-quite-so-pretty heirlooms. Okay, the pink one isn’t bad. But the three Black Crim are all cracked and the one has been recently chewed on by a caterpillar. Ugh.

Yes, those are carrot tops by the tomatoes. No, I didn’t take a picture of the carrots. I pulled a couple of the ‘Kesar’ red carrots from the India garden because the tops were so tall and I thought I’d check them out. The roots look pretty small yet, so I don’t know if it’s the heat and time of year, the variety, or if it just needs to keep growing. 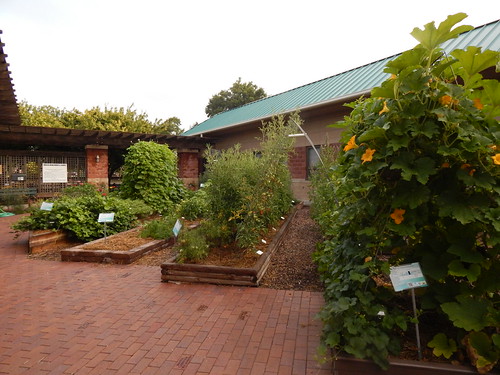 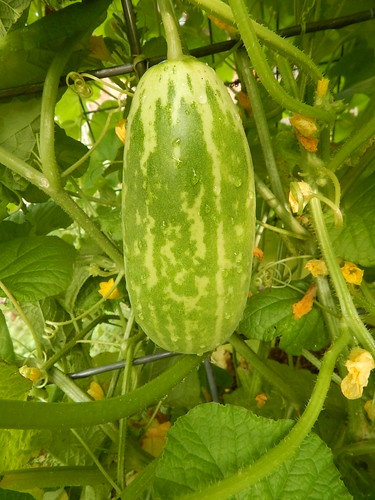 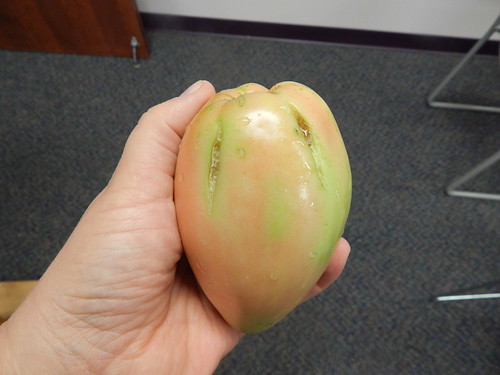 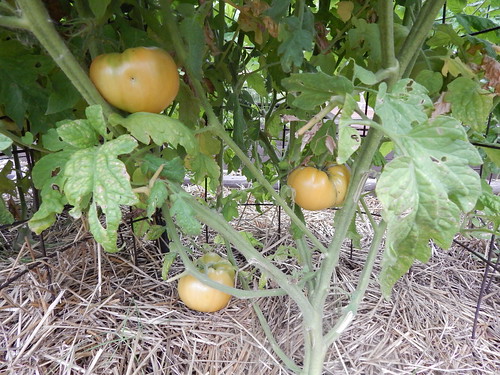 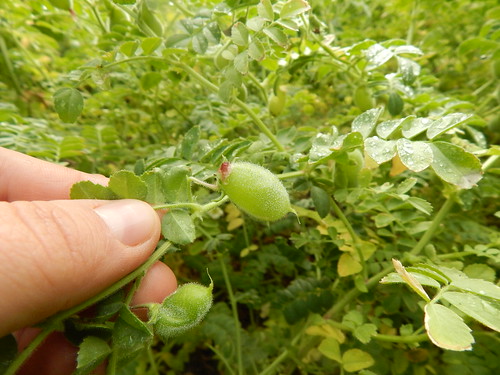 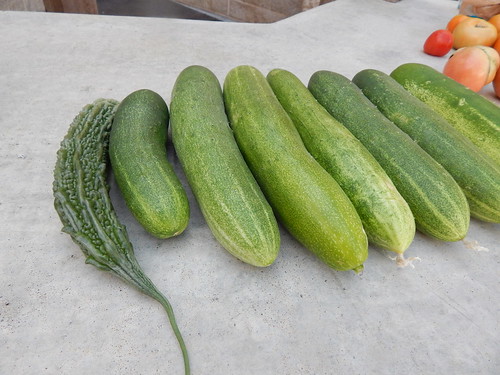 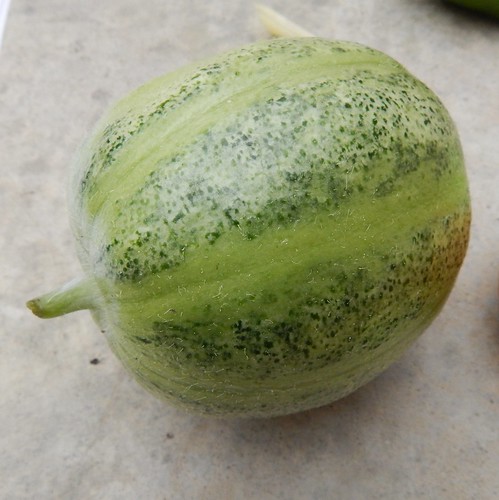 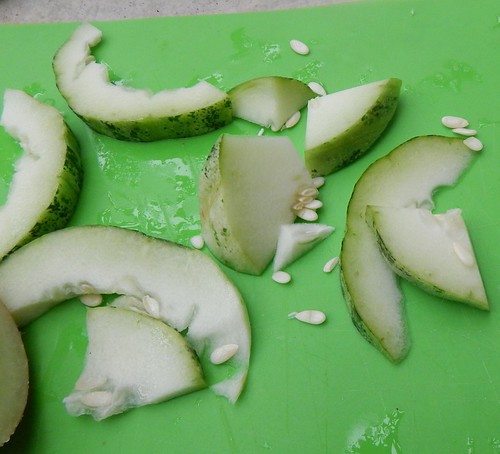 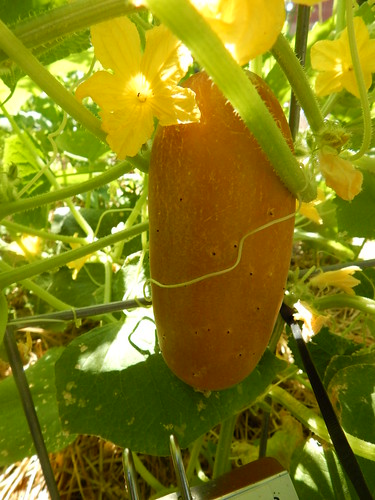 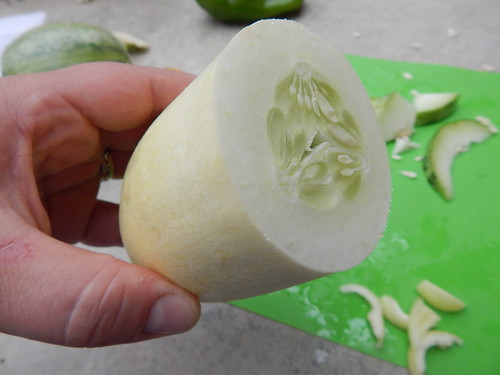 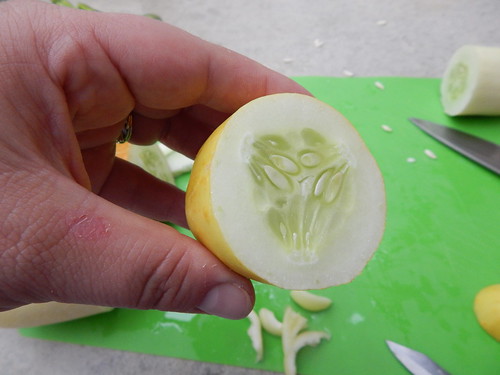 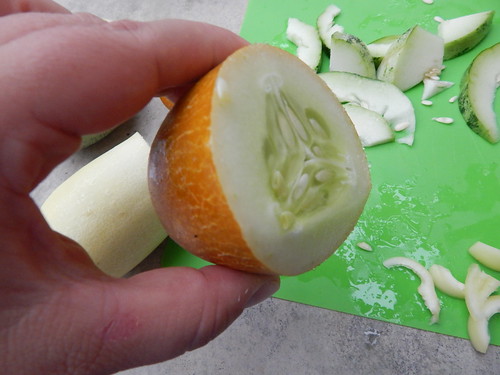