We have hit our stride with summer produce over the past couple weeks, and unlike some years, there really aren’t many signs of decline around the garden…yet.

Although, in the interest of full disclosure, we did remove the cucumbers that were in the accessible beds. They were pretty sad at this point. The rest of the garden looks a little bit like a jungle. I find myself dodging plants that are trying to take up space in the aisles when I walk through the garden.

We chopped and incorporated the other areas of buckwheat this week. One section was to prevent it from going to seed. The section pictured here we needed to clear so we could plant fall veggies in a couple weeks. A couple of our Master Gardeners brought hedge trimmers to do the chopping step with the buckwheat, then we used spades and garden forks to turn it under. 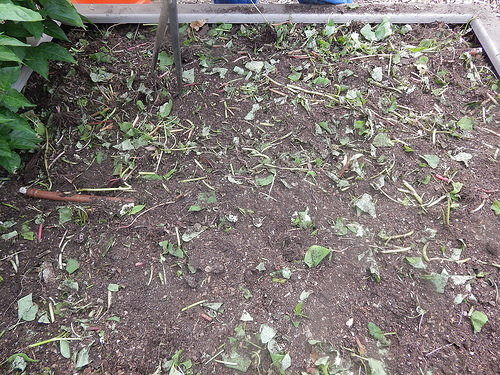 Here’s the post-turning shot, in case you were curious what it looks like. It takes buckwheat only about 2 weeks to decompose sufficiently once incorporated.

Some of the purple peppers are beginning to color. This variety turns orange, then darkens to red. I think this in-between stage is a pretty cool look!

The Chinese Long beans are starting to produce, which is always fun. The challenge with them is that I’m always torn between the desire to leave them on the vine to see how long they get and knowing that for optimal eating quality they should be picked at about 12″ long. 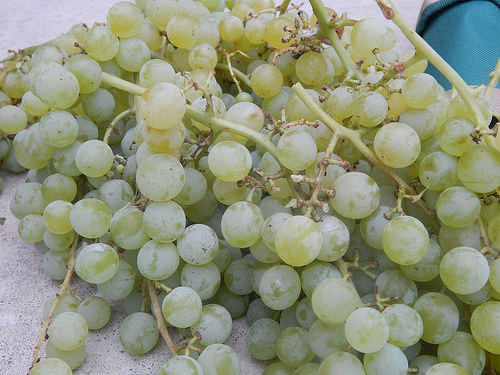 We harvested the bulk of the grapes from our grapevine this week. We have a ‘Himrod’ grape, which is a green-gold, seedless table grape. The skins are a bit tough in some cases, but the flavor is exceptional. They taste nothing like grocery store grapes. 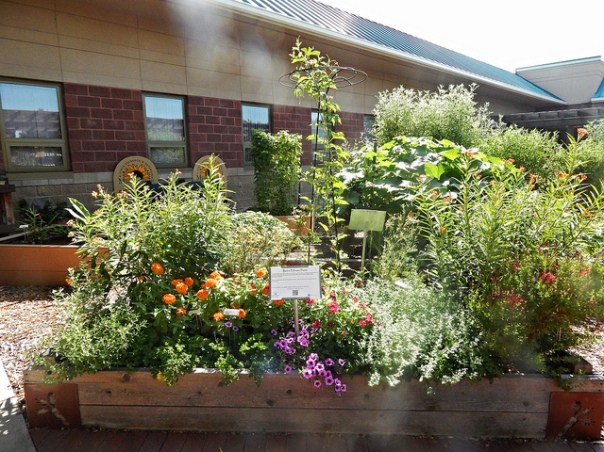 Just to wrap up for today, another quick look at our Pollinator garden. Since our last look, the passionflower vine has reached the top of it’s trellis. Everything else seems to be doing well, and we have had some caterpillars on things.

Another sweltering week, another Friday photoessay! Let’s take a break from our Tomato Day preparations to take a quick look around the Demonstration Garden.

I would say that we have reached the midpoint of summer in the garden. While many plants are still going to grow and mature, the tomato plants have reached maturity. With the usual onset of insects and diseases, there’s a lot of downhill to go from here. We will also be planting a range of things for fall over the next few weeks. 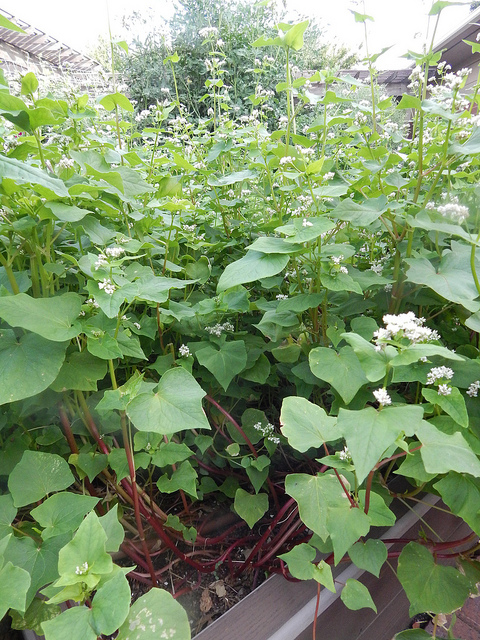 This is the buckwheat that we planted first, following the lettuce. You can see that it has put on significant growth in the 5-6 weeks it has been planted and has started flowering. It has not yet started going to seed. We cut this buckwheat back and then put about 2/3 of it in the compost bin and the remainder we spaded into the soil. 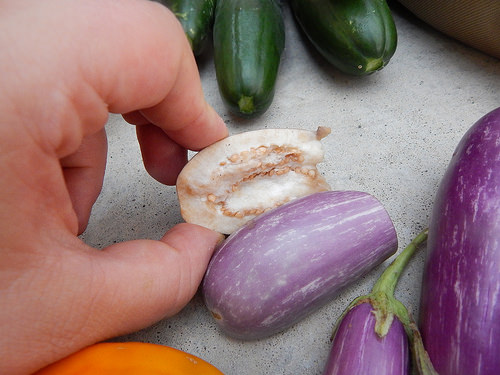 Eggplant can be a little bit tricky to determine when it is ready to harvest. Like many vegetables, it is typically harvested at the botanically immature stage. It can actually be harvested at almost any size, up to the point where it starts to mature. Once sign of that maturity is when the color goes from bright and glossy (like the eggplant on the far right of the picture) to slightly faded and dull (center). When we cut into the dull colored eggplant, we see that the seeds are brown rather than white, a sign of maturity. While the eggplant can still be eaten at this stage, the seeds are much tougher and will make the texture of the eggplant less enjoyable to eat.

We have started picking a few of the Purple Bumble Bee cherry tomato, and so far it is a bit more pink and green than purple/maroon and green. The flavor is decent, but not spectacular. 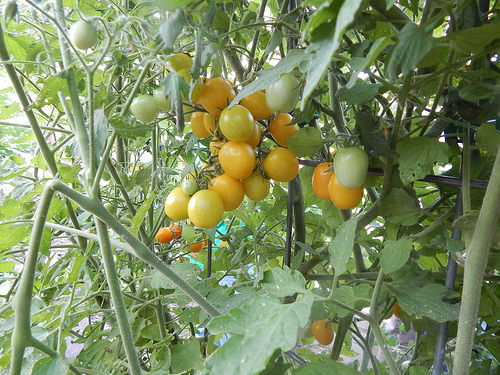 The ‘Esterina’ cherry tomato has been very impressive. It has had several large clusters ripen already and has more to come. The flavor is also very sweet. So far it is definitely a winner! 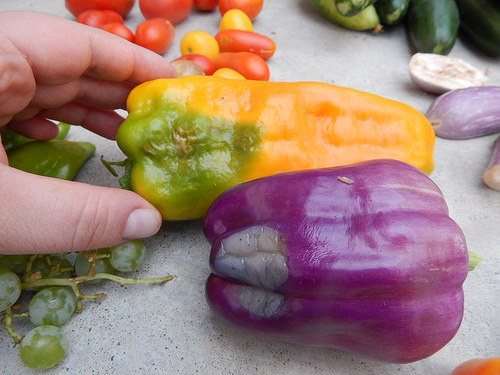 The peppers are maturing nicely and I’m looking forward to seeing how they all perform. However, with some of the wind and rain storms that we’ve had, several of the plants are leaning over and exposing the fruit to more sun. Hence the sunscald on the two peppers shown in this picture. Fruits with sunscald should be picked to prevent the development of disease. A mature fruit with sunscald can usually be eaten if the damaged part is trimmed off and no diseases have developed.

Continuation of the Buckwheat Saga

Okay, so maybe calling it a saga is a little overboard. I meant to post about incorporating the first bed of buckwheat last week and never got around to it. I’ll go back and show you what we did last week, what we did this week, and what a difference a week makes!

Last week we cut back the buckwheat in bed 2 where we will be planting the broccoli, cauliflower, and cabbage next week. I wanted it to have 2 weeks to break down. It was just barely starting to bud out and was about 8-10″ tall. We cut it back with shears/hedge trimmers.

Then we turned it under with a shovel. Obviously, in a non-raised bed we probably would have just used a tiller and moved on from there. The shovel was work, but could have been worse. We were careful not to damage the drip lines.

This is what it looked like 3 days later. You can still see some plant material, but it was decomposing rapidly.

Oh yeah, we got almost 5″ of rain over the weekend, plus another 1″ last night. You can see that there are still signs of the straw in the raised bed and a couple little buckwheat plants, but otherwise you would never know anything was there.

Meanwhile, the other bed with buckwheat was still growing…

Here’s after one side was trimmed down. You can see how much more plant material there is this week compared to the bed we did last week. (If you want to see an “action” video of cutting back the buckwheat, you can check it out here.

This time, the “after incorporating” shot looks a lot like the “before incorporating” picture from last week! We will probably have to do another turn next week, rather than just let it go.

Hopefully the buckwheat is going to hold some of those nutrients in the soil while it keeps on raining! Our fall veggies would appreciate it!

Posted in Around the Garden, Working in the Garden

Wow! The eggplant and tomatoes are sure kicking it into high gear this week! So are the spider mites and stinkbugs… Let’s take a tour of the garden!

The top end of the garden is finally starting to look like something, with the sweet potatoes growing fast and the sunflowers and vegetable arbor also looking great. You can just see the green haze of the buckwheat.

Here’s the view from the other end. I wasn’t going to show this picture because I’ve got so many this week, but I wanted you to have a better sense of just how crazy those tomato plants are getting. The one on the end is the ‘Limmony’ heirloom.

The ‘Taxi’ tomato plant continues to produce like crazy. After a couple of larger initial fruit, they have settled down into very consistent 4-5 oz fruit, which is what they are supposed to be. No signs of cracking so far, but I picked a LOT of tomatoes this morning.

We uncovered the squash in the Pizza Garden this week because it was starting to bust out from under the row cover. It had several broken leaves from being under a too-low row cover. It seems to be bouncing back just fine! It also looks to have some buds starting, and so far there is no sign of squash vine borers. END_OF_DOCUMENT_TOKEN_TO_BE_REPLACED

Since we harvested the rest of the garlic and shallots last week and we are not going to be planting our next crop until early August, we have a unique opportunity to grow a cover crop in our Demonstration Garden this year!

Cover crops are typically grown for a number of reasons: prevent soil erosion, increase soil nutrients, suppress weeds, improve soil organic matter content, and provide food for beneficial insects. They can also help with soil compaction & drainage, suppress diseases, and break insect cycles. With such an impressive list of benefits, you wonder why we haven’t done it before!

The challenge with cover crops is that they need a certain amount of time to grow, which can interfere with other things you want to grow. In our case, we had a large area that was otherwise going to be empty. Enter the buckwheat!

Buckwheat grows fast, tolerates drought, and can scavenge phosphorus from the soil. It is also excellent as a weed suppressor, and the flowers provide habitat for pollinators and other beneficial insects.

The first step was getting the soil moistened in the areas where we wanted to plant the buckwheat. Except for rain, most of those areas hadn’t been watered in a couple weeks while we were drying down the garlic and shallots. As you might imagine, the soil was quite dry! We watered and worked up the soil to ensure even moisture. Then we scattered the buckwheat seed (about 1/4 lb per 100 sq. ft.) and raked it in.

This is the buckwheat seed. It is rather triangular (well, pyramidal) seed that almost seems like it has wings on the edges. It is actually related to rhubarb, and isn’t even a grain (like wheat), but rather a seed (from a nutritional standpoint). We should have some germination by next week or maybe even the end of the week.